She traveled to what was then known as British Somaliland, now a semi-independent republic of Somalia. I’ll let reader Stijn tell the rest of the story (from comments):

Edith Cole (1859-1940) was a English lady that lived in Woodhay, Hampshire, England. Her father has done good business that enabled to familie live a prosperous life in wealth.
She was befriended with mrs. E. Lort-Philips, which was the wife of a explorist/big game shooter.
In early 1895 they (Miss Edith Cole, mr. and mrs. Lort-Philips, mr. Aylmer) went to Berbera, British Somaliland. From there they made a 3 month expedition in the Golis Mountains.
During that trips, the men collected animals (they shot them firts that is), while the ladies collected butterflies and plants. One of these is Edithcolea grandis, named after Edith Cole.

I’m currently collecting info about this expedition and it’s members. I’ve some letters, articles and maps that help me reconstruct the expedition.

Here’s the plant in question, named for Edith: 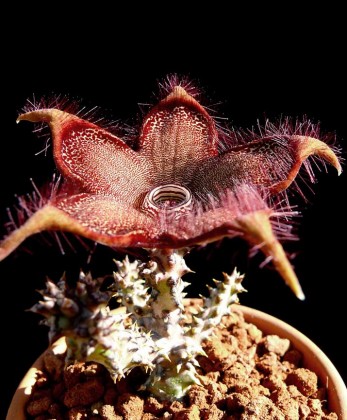 That is some flower.