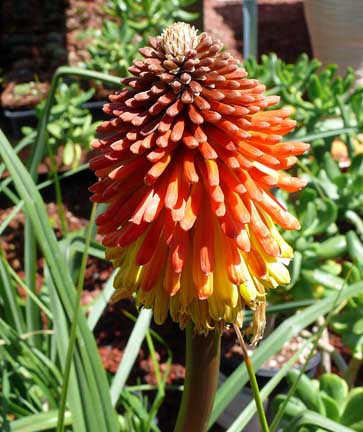 Big shaggy leaves, but really it’s all about the blooms, as it is with all these aloe relatives. What sets this one apart is that the flowers are a fairly dense pyramid, unlike the regular red hot pokers you see everywhere. And they have both the yellow and the red together, in one fell swoop.

I wonder what East Cape it is they’re talking about? I’ve been to the east side of Cape Cod, but it’s not usually called the East Cape there, it’s usually called the Outer Cape, or the National Seashore. Really, they’re my favorite beaches in the whole world, those easterly beaches of Cape Cod, but then I’ve never seen any of these kniph’s over there, so it must be another East Cape they mean.

Probably not this one either.