Action 4 News from the far southern Texas border region warns you to look for Meth in your Cactus shipments. Or if you don’t get truck shipments, then the grocery store would be a good place to check.

Two men are behind bars after authorities found more than 132 pounds of crystal meth hidden inside a prickly pear cactus shipment….

The truck was carrying 1,380 boxes of “nopales,” which are prickly pear cactus pads used for cooking…

Officials found 94 packages with 132.2 pounds of crystal meth hidden inside the produce. 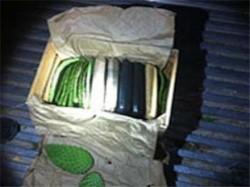