Well obviously you can plant cactus and succulents in your front yard to reduce your watering. Why else are you re4ading my blog? Cactus are also the future of desert-grown food supplies. Well you knew that already too, anyway. But now IO9, the sci-fi website, wants you to know that Cactus may be the future of bio-fuels. Who knew!?! 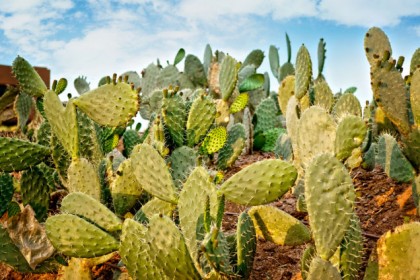 As drought strikes broad regions of the world, farmers are focusing on the crops that can feed people—not the crops that can power their cars. But what if there was an energy crop that could grow where traditional crops can’t? Even in a drought? Enter the cactus.

The prickly pear cactus is one of the more common cacti in our world. It’s also a member of a unique group of plants that use an unusual photosynthesis pathway that evolved due to extreme growing conditions, in arid climates with long, hot, dry days and cool nights….

CAM plants have a special way of going about the business of photosynthesis: They only absorb carbon dioxide when it’s cool out, which means they don’t lose as much moisture as they would during the sunny, hot daylight hours. Then, when the sun comes up, they close their stomata—their pores….

Though there’s plenty of research to be done on how these plants would do as bioenergy fuel, Mason and his co-authors suggest that prickly pear could help make biogas—or gas which is made when organic matter is broken down without oxygen—along with other forms of bioenergy like bioethanol.

Whew, that’s a lot of science!