Did I mention alcohol today? Well, here’s some more cactus-related alcohol in the news. 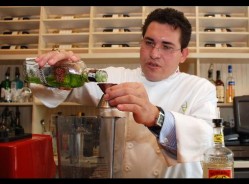 `I wanted to create something that represented those flavors I grew up with,” Merino said of Macondo’s cocktail menu. The restaurant, which draws its name from the fictional town in Gabriel Garcia Marquez’s “One Hundred Years of Solitude,” showcases nine of Merino’s concoctions.

`My Most Original Drink’

He also uses Cointreau, agave nectar, honey, lime juice and a green liqueur called Agwa, made from Bolivian coca leaves, which has “a weird flavor by itself but blends perfectly in this drink.” Merino is always shooting for complexity and balance.

He puts all the elements into a blender with a little ice. Before pouring, he coats the rim of the glass with nopal salt, which consists of dehydrated cactus, lemongrass and other spices.

And he uses cactus and agave in one fizzy mix.

Well, this is what you get after I’ve just spent the whole day trying to set up a new POS system for the store.