Hi,
My wife and I were at Cactus Jungle yesterday and spoke to a gentleman there about the scabby bark that’s developed all over our Enchinocereus grandiflora.  He suggested we send pictures so that you might be able to diagnose the problem from afar.  We live up on Cedar Street near Cedar-Rose Park, so if push came to shove, we could probably also bring it down — but it’s a big plant in a big pot. 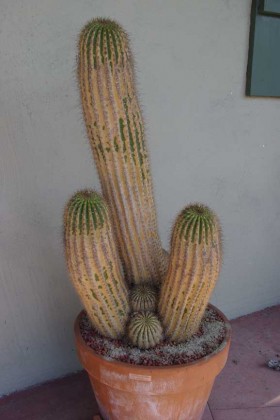 Some info:  the pot was on south-facing steps in full sun for about two years, but we’ve since moved it into a shady spot.  The scab formed before we moved it, but moving it doesn’t seem to have prevented the scab from continuing to form on new growth at the top of the plant or on the pups.

Leif,
I’m sorry I don’t have better news. I don’t know what caused this problem, but I could guess either it has a virus or it got sprayed with a chemical and got burned. It could have been overspray while spraying a neighboring plant even, since it was in full sun before. Currently it has mealy bugs, which can take over when a plant is sick.

There’s nothing we can do at this point if the plant has a virus as it has progressed too far. However if it was caused by a chemical burn then at best you might see new green growth out of the top as the plant heals. If you want to give it a try to save it you will need to kill the mealy bugs; use neem oil while the plant is in shade. Eventually all the scabs will bark over (turn to bark) and then you may see new growth from the tips.
Peter