Aeonium pseudotabuliforme isn’t the Dinner Plate Aeonium, but it is a very large headed rosette Aeonium. The leaves are glossy and rounded rather than hairy and pointed, hence the pseudo in the name. It’s also more propbably a subspecies of A. undulatum, and not its very own species.

From the Canary Islands, this succulent will branch, stay low to the ground, and eventually have yellow flowers.

It is very green and will not color up in sun, so it’s probably better to grow it with less sun.

This makes it also a good choice for indoors, but the heads do get big – dinner plate big – so maybe you should let it grow outside where it will have more room to wander.

The Canary Islands are off the coast of Italy, or Morocco or somewhere in the region, but the Islands are probably closer to Europe because they are Spanish-owned, but in reality they are right off the coast of Africa. Perfect Mediterranean climate makes for perfect succulents for coastal California. Yay!

Here, have a bonus large-headed Aeonium from the African Islands owned by the Europeans known as the Canary Islands. 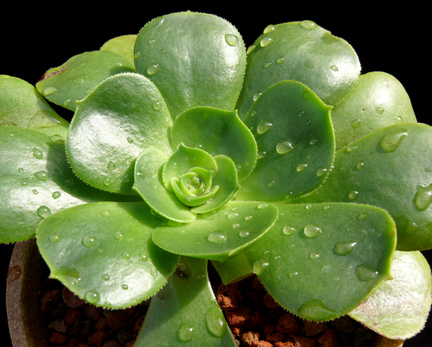