In 2002, there were only about 21 Sonoran pronghorn left in the United States. But their numbers are rising as researchers have collaborated to carve out a home on a wildlife refuge, expand the herd with a captive-breeding program and help the animals reclaim their range….

in 2002, their entire range went dry… Pronghorn can also eat cactus to survive, researchers have found. They will eat chain-fruit cholla, which is 85 percent water, Hervert said, but it doesn’t provide a lot of nutrition.

In 2002, biologists watched as the last of the herd was reduced to eating cholla, slowly starving to death and more than likely within a few weeks of dying, Hervert said. “It was hard to watch.” 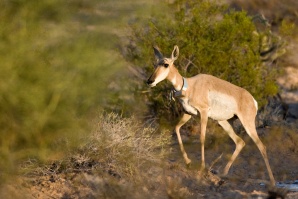 When rains finally came, the herd stabilized, but the agencies watching the animals knew that something had to be done.