Damage on a San Pedro Cactus

I was wondering if I could get an opinion from one of the experts about a disease(s) my cactus seems to have acquired. I spoke with someone on the phone the other day, and he suggested I e-mail some photos. Here’s the gist:

I purchased a beautiful 4′ cactus at Cactus Jungle about 10 mo ago. About 1 mo ago I noticed it had developed what appeared to be a nasty case of scale. I applied a potassium-based organic miticide to the surface 3 or 4 times over the course of a month, and the scale seemed to mostly disappear, but at about the same time, I noticed two additional types of lesions on the cactus:

1.) Raised, blister-like lesions, filled with a black tarry liquid, began to break out up and down the shaft of the cactus (see photo #1 below). The began to multiply and coalesce into lesions several inches in length. Some appear to be drying up and turning gray now, but others are still popping up.

2.) Flat, dry brown speckled patches that don’t scrape off, some reaching up to several square inches, have formed near the bottom of the cactus, but appear stable (see photos below).

I was wondering if you might know what either of these two types of lesions are. Do you think they relate to the original scale problem, or might they be related to the treatment I used, or perhaps just stress? What would you suggest as treatment?

Any advice or help would be greatly appreciated
Many thanks 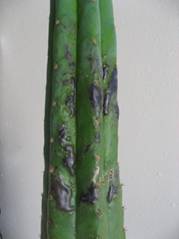 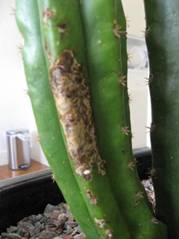 It looks, from the photos, like the plant has a chemical burn. It is also possible, if you scrubbed the dead scale off that the plant’s skin was damaged. Either way, it appears to be cosmetic damage, for the most part, and the plant will probably come out of it fine, with some scarring. If there are still any soft spots on the plant, then gently clean these areas with household peroxide.