I wonder why they call it cyclops? Anyway, we get questions. I suppose I should refer you to my youtube video about Aeonium bottom leaves, which answers so many questions in less than a minute.

On to the question.

I bought an Aeonium “cyclops” from you last September. It’s about 20 inches tall with 11 branches. It’s indoors, but gets plenty of light. I’d say that up until about a month ago, it was thriving. But in the last month I’d say about half of it’s foliage has dried up and fallen off. At this pace it’s going to be bare in a few weeks. I don’t notice anything different, except on one of the branches on the backside of the foliage has some droppings that visual appear to be like a home repair caulk. Is this normal or do you have any suggestions?

Michael,
Can you send us photos, especially of the backside?
You may have a pest, but then the Aeonium is a winter-grower and will go dormant in summer, often losing half its leaves off the bottom.

And Michael does send along photos, after the break… 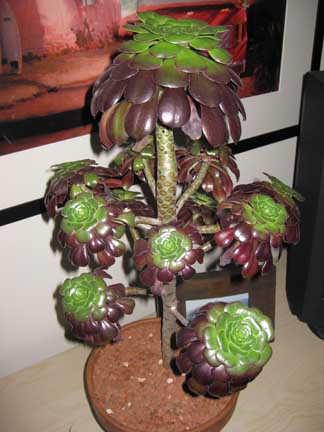 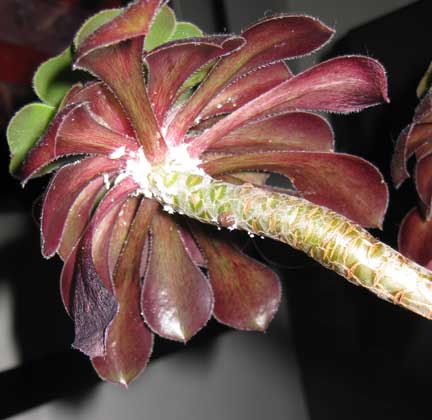 Michael,
The plant overall looks fine – it is losing bottom leaves for the summer, so nothing to worry about there. However, the white stuff on the one branch is mealy bugs. We use 100% Neem oil to kill mealy bugs. You can find it at various local nurseries, or we carry it. It is a natural insecticide that won’t burn succulents (as long as it is not the 70% products sold as Rose Defense) and that smothers on contact, keeping the bugs at bay for up to 2 weeks, at which point you should re-apply. I would pre-emptively spray the bottom of all the branches and the trunk, as well as a heavy spray on the soil.

To help keep it from getting more mealies, make sure you keep the plant dry in summer, watering no more than every 2 weeks, and making sure it doesn’t sit in water.
Good luck,
Peter