Hi Guys,
Both front porch and back porch potted succulents are getting vandalized and/or eaten by local animals. The uprooted plant in the wooden planter box is in front. 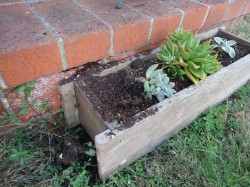 I think it might have been caused by a deer rooting around? The other succulent is in the back yard and appears to have been munched by an animal. 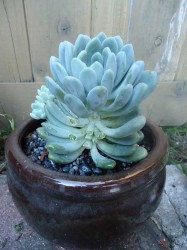 Raccoon? Squirrel? The critters also like to dig around in the dirt, especially in freshly potted plants. Any advice?
Thanks,
Kelly

It looks like squirrel damage… try sprinkling with cayenne pepper and then pick up a bottle of animal repellant when you get a chance. We use and sell Deer Off which works on the stupid sky rodents as well! The cayenne works (until it gets wet) on mammals fairly well but not birds, but make sure to wear a mask when sprinkling it on a breazy day, it hurts if you breath it in or get in your eyes!

Hi Hap,
Thanks! Coincidentally, a couple of days later, I actually saw a squirrel eating one of the fat succulent leaves. He had taken up to the garage roof and just sat there furiously munching it as I glared at him. Arg!

I’ll try the pepper and animal repellant. Will check out the Deer Off next time I come by. Last night a deer ate every last yellow bloom off my potted coreopsis. Will keep those in the back yard from here on out…