My name is Allen and I live in half Moon Bay. I’ve got 4 large cactus growing in pots and they seem generally healthy and are growing. But they are developing what appears to be a scale or fungus and I’d like your advice on how to treat them. I’ve attached some photos of the worst/most representative areas of concern. I’ve sprayed several times with Neem oil and it’s possible that it’s making a difference but it’s to early to tell. The columns are firm, no mush is developing and all is good other than what you see in the photos.

Your thoughts on the malady and the cure?

Thanks, realy appreciate your help! 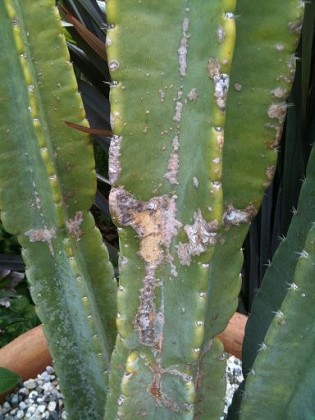 It looks like your cacti has either a virus or a fungus (or both) as well as a few scale. Neem Oil should deal with both the fungus and scale with a few treatments. I recommend retreating it with Neem Oil, spray to the point of run-off, once every seven to ten days at least three or four more times. If any of the infection looks like it is turning to rot, (the spots will turn either orange or slimy-black), treat those areas with regular 3% hydrogen-peroxide, paint or spray on the infected area. Alternate with the Neem treatments.

If it has a virus, the best thing you can do is give it some liquid kelp (Maxicrop or other brand) to help boost it’s immunity and fight off the virus, just like you taking a vitamin, or drinking orange juice when you have a cold. Hopefully the plant will fight off the infection and heal. It will likely always be scarred, but the infected areas will “bark” and give it character.