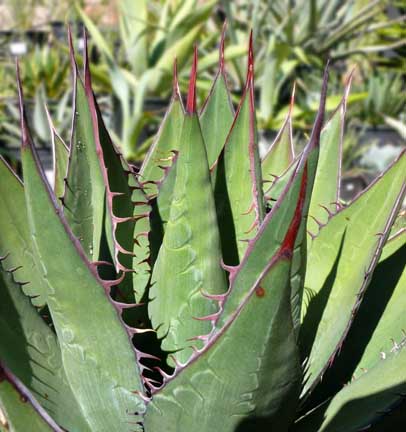 Agave shawii is a coastal California native, Southern Cal. and Baja, but still coastal so you know it will do well in Berkeley and nearby. While the rosettes will get 2 to 3 feet across, taller than wide, they will also form large clusters so the agave can take over an area easily 10 feet across if you let it. And with those gorgeous red spines on the new leaves glowing in the California sunshine why wouldn’t you let it? Once they’ve formed a large enough cluster it would be difficult to remove, so make sure you have it in a place you want it.

Full sun at the coast, it could do with afternoon shade further inland.

Should not bloom until 15 to 20 years old, and then the bloom stalk could be particularly impressive for such a smaller species – up to 40 feet tall? Harsh!