Could these heavy rains presage even heavier rains to come?

Discovery News has this story of a team of scientists modeling a, “MONSTER ‘FRANKENSTORM'”,

The recent California storms left the state battered and bruised, but that could just be a taster of things to come. 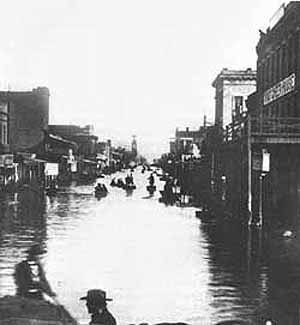 transformed the Sacramento Valley into an inland sea, covering the tops of telegraph poles with steamboats passing over the farmlands to deliver goods and rescue survivors. The Santa Ana River formed two large lakes – one in the Inland Empire and another in the flood plain of Orange County. Probably the only definite high water mark in Southern California is at the Aqua Mansa, just south of the present city of Colton. Hydrologic studies at Aqua Mansa, document a discharge in 1862, three times the magnitude of anything since.

Of course, driving to Sacramento in winter normally the Sacramento river basin is usually flooded and looks like a lake. Even if that hasn’t happened in the last few drought years, it’s not uncommon. That’s why they don’t build houses on flood plains. Or shouldn’t.