Cactus in the desert can have wide spreading shallow roots. But what about in wetter areas like here, this winter?

Cactus Museum has this to say.

Roots: Cactus roots help to gather and preserve water in several ways. In some cacti, shallow, extensive root systems spread laterally away from the plant (e.g. some prickly pear roots spread 10 to 15 feet away). In brief showers which only wet a few inches of soil, the shallow roots help the plant maximize water intake from a large area. 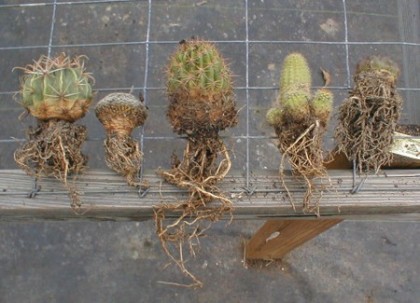 Cactus roots also change characteristics as the water supply fluctuates. After a rainfall, existing dehydrated roots become more water conductive and new rain roots are formed to help soak up water. In times of drought, the rain roots shrivel and fall off and the existing roots dehydrate. The shrinkage of the existing roots creates an air gap that helps to prevent water in the roots from escaping back to the soil. A corky layer on the roots also helps to prevent water loss.

Now that may be true in the desert, but we have found in a densely planted garden where there is water down in the (fast-draining) soil (that you’ve added or amended in your garden), the roots can be deeper. Competition between adjacent plants will cause roots to try deeper than wider, and when they find water down there, which they won’t in the desert but they will in your garden, they’ll want to stay down there.

In fact, we notice that they will go down until they hit the water table in winter, and then they’ll rot off back up to the drier parts of the soil, which also tends to match up with the depth to which you amended your soil to make it faster draining.

This will then cause them to spend the early part of spring growing new roots before they start growing new branches. Every year this cycle repeats, and if you haven’t amended your soil deep enough, then eventually the cactus will fail.

The Lesson: make sure you have amended your soil to be fast draining deep enough that the roots will have plenty of depth to establish and survive the winters. For larger cactus, we recommend at least 2 feet of depth, and don’t crowd them too close to each other either. Give the roots room to grow above the winter water table.