Hello,
Would you be so kind as to tell me if there is something wrong with the two specimens? One is a Fairy Castle Cactus (I think) with brown spots forming and the other specimen (no idea what kind) is discoloring or developing bark. I am new to all this. Growing the cacti indoors under fluorescent lights with reflectors set about 12 inches above the plants. 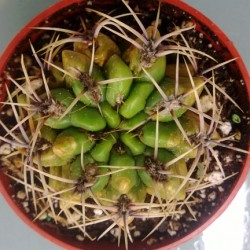 Steve,
The round cactus, probably a Gymnocalycium, looks like it might be rotting. If the lower portion that is turning brown is soft then the plant is not going to survive. It looks like it may be too much water for the light conditions.

The Fairy Castle, or Cereus, looks fine from the photo. The spots could be scale, an insect that you can clean off by spraying rubbing alcohol directly onto it which will kill it and break down its shell, and then you can wipe it off with a soft paintbrush. Or it could be some damage from neighboring spines that have healed over. The plant looks like it could probably use more light and less water too.

I don’t know where you are or how hot it is there, but assuming that it is not too hot then growing these under lights I would water every 3 to 4 weeks only.