Lise sends along a picture of her cactus garden in bloom. It’s hard to tell from the small photo, but it appears she has both Cereus peruvianus and Echinopsis pachanoi. 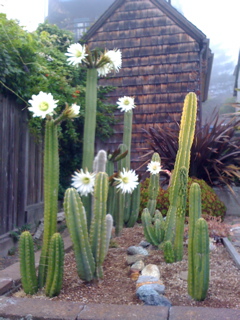 They both have the same giant white flowers, but the Cereus is a night bloomer, with the blooms only lasting the one night, and is pollinated by flies. Whereas the Echinopsis is a San Pedro cactus and the bees love those during the warm daylight hours.