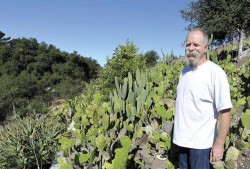 A Nipomo (CA) man who grows and markets edible cactus nationwide believes its value soon will be discovered by U.S. consumers as well as those working to help poverty-stricken countries.

“This plant could save the world,” said John Dicus as he gave visitors a tour of his Rivenrock Gardens.

But how should we eat this cactus that you sell?

Dicus offered visitors a taste of his own recipe for cactus salsa.

A mix of beans, corn, tomatoes, onions, cilantro and cactus chunks that look like chopped broccoli stalks, the salsa has a unique flavor but doesn’t scream “cactus.”

“Cactus should be seen as an herb, where it doesn’t really overwhelm the salsa,” he explained. “It’s been compared to green beans. It should be mixed in as an overall ingredient.

That’s practically a recipe. And what do you know, there’s a whole recipe page too. Now that’s service.

And where is this so-called Nipomo? Southern Cal of course.