Cactus and Succulents are often described as being “architectural” but now someone wants you to know they are the heart and soul of modern architectural design. I may be exagerating.

The orderly nature of modern design appeals to our need for simplicity in a progressively complex world. The simple lines of both modern architecture and interiors offer respite from strip commercial, traffic and media where color and image change faster than ever…. 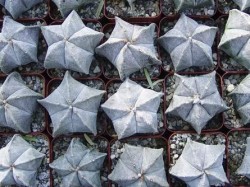 (O)ne group of plants seems intrinsically suited to modern design. It is the cactus…

We often suggest a lineup of simple column cacti to set off a modern house. But not just column cacti will work. It turns out that a lot of Agaves are also just as successfully merged into modern architectural design as the cactus. So there. And don’t get me started on the Dasylirions.