Saguaro National Park makes the news every ten years or so. 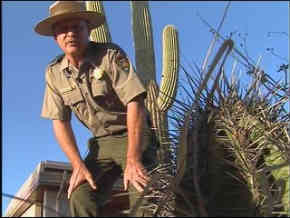 That can’t be good.

“The population seems to be coming back,” Swann said.

(I)t will take time… “A saguaro that’s about an inch tall, is about seven years old,” Swann explained.

Indeed that is so. Sooooo slooooowwww….

When people used to regularly take saguaros out of the desert to put in their yard, they actually took a whole generation of medium-sized plants out. That’s why with the oldest saguaros dying, they’re not being replaced with new giants yet. It will take years for the newly protected babies to fill in behind that lost generation.