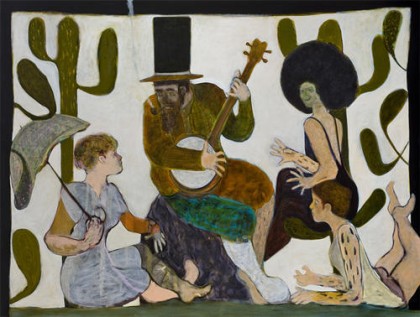 “Waiting for Romance” by Ryan Mosley

“Something might happen in one painting that affects the others.” The three largest canvases — “Wild Brew,” “Waiting for Romance” and “Target Practice” (an impossible still life depicting a large cactus growing from a stack of hats) — present the same Southwestern color palette and shared visual motifs: mustachioed frontiersmen, jumbles of cowboy boots, old-fashioned hats, a cream-colored background expanse. “I think it feels like something is about to happen,” Mosley says of the three paintings….

The cacti make up the exhibit’s most obvious theme. They grow from the ground, surrounding the figures, their arms gesturing from the edges of the compositions like the marginalia of illuminated manuscripts. “I’ve always been interested in figurative painting, and cacti are the most figurative plants,” he says. “It’s like they’re waving at you.” 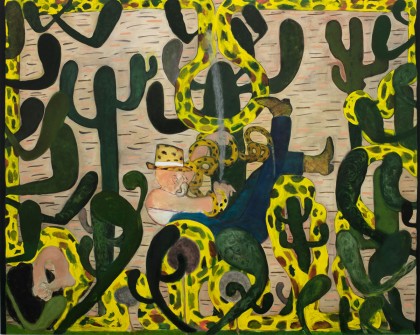 “Taking Care of the Crops” by Ryan Mosley at Grand Arts

This is some impressive painting work. I won’t be able to make it to Kansas City, or to his gallery in London either. I will just have to be satisfied with this online selection.