Hello,
I hope you can help me identify whatever has been eating
the new bamboo shoots. What ever is eating the shoots
appears to be doing it at night and doesn’t seem to be
interested in the mature stalks. In all other respects the
plants seem to be doing fine, I purchased them about a month
or so ago from you and your advice was terrific. I thought
it may be slugs as I have seen them around, so I placed some
dead line around the plants in hope of determining if they
were the cause, but no luck. There doesn’t seem to be any
evidence of rodent presence as far as I can tell. I have
included some images of the bamboo. In the background you
will see some stalks that are older that seem to be eaten in
the same way. Any advise you could shed on the cause or
culprit would be much appreciated.
Thanks,
Ai 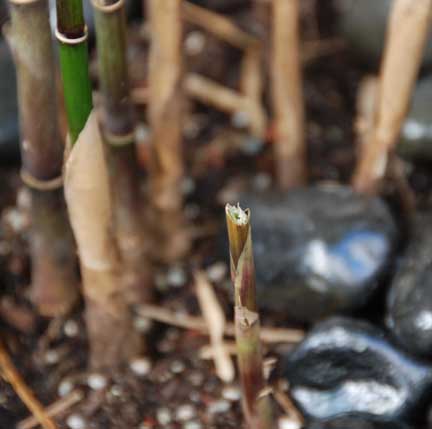 I have to say this one is a bit odd. But I think you have something large, but it looks like deer can’t get to the plants, so perhaps a raccoon, opossum or rats. After all bamboo shoots are tasty. I suggest you sprinkle the shoots with both a liquid animal repellent, like Deer Off or Critter Ridder and copious amounts of cayenne pepper (You can get this inexpensively in bulk at an ethnic market or Costco). You may just want to try the cayenne first, since the repellents smell pretty bad for use close to public use spaces. at least for a few days….