It is! It is another cactus costume for October National Cactus Costume Month here on the blog.

Someone named Hulaman likes to dress up every year, and not for Halloween, but for the Bay Area’s favorite race, Bay to Breakers. 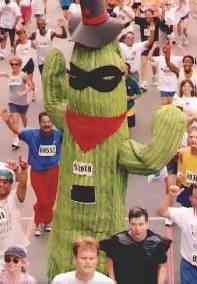 1997 The Lone Saguaro
Since I moved to Tucson I wanted to go as a huge Saguaro cactus. The tricky part was making it so I could ship it with me. I’ve worn it in Tucson several times. I tried to do a play on words with a costume in a costume.