I’ve come across your blog and a few others while researching what I have done wrong with my aloe plants. It is very nice of you to answer all those questions. I was hoping you could help me please. Also, please bear with me, this e-mail might have a lot of wording, I’m told I’m long winded…

I have quite a few aloe plants that we’re originally my grandmother’s. Once a year or so my grandfather would give them to me to separate the baby aloes and re-pot them. They always did very well. Now I have them, and the year before last I had no problems with them. I wintered them in front of a patio door that faces east and didn’t water them but once over that time. After the last threat of frost I would put them on our deck which is under a large maple and they would get dappled light and indirect rainwater all summer long until the fall.

This past year I wintered them in my basement which stays above 50 and has one small west facing window. I watered them quite a few times, and from what I’m reading online that wasn’t the best idea. They started to slightly wilt under their weight, and I thought maybe they didn’t have enough water and I watered again. I’m finding out this is bad. When I put them outside in their normal spot on the deck for two weeks I was hoping they would perk up, they stayed same. I thought maybe the basement was too dark and they could use more sun, so I moved them to the south side of the house in full sun. I’m reading this is also very bad as they wilted a lil more and took on a slightly pinkish brown hue. Sunburn? 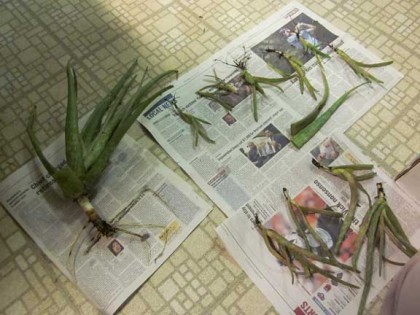 As I kept reading I found out about root rot and I panicked, I don’t want to lose my aloes 🙁 Some people suggested to un pot them and check the roots to see if they’re brown or squishy, and maybe leave them in the air to callous? Also saying they can live like that for a few weeks?

I’ve un-potted 2 pots of 6 total of my aloes and their babies (or pups) and checked the roots for rot. A few had some smaller light brown roots that squished a lil that I snipped off, but most were still white and firm. I did however notice that they didn’t have nearly as many fine roots as they do when I usually re-pot them. I’m especally concerned with my large mother plant, a good number of her roots were brown and squishy, including the tip of the taproot (Do aloes have taproots? I mean the large main root coming from the base) that I cut off and rinsed to check. I have them back in the basement drying on the newspaper. I also took the others out of the direct sun.

I’m I doing the right thing to save my aloe plants? If this is the way to go I can un-pot the others and set them out to “dry”. I really don’t want to lose them, the big one bloomed for the first time (that I know of) last year. Any advice is appreciated, and I thank you for your time in reading my long winded questions.

P.S. It might be hard to tell from the pictures, but they are a bit murky browner with a pink tinge then it seems in the photo. They are also greener on their undersides then the tops. In the close up picture of the mother plant’s roots, the small bumps on the main root look like where it is trying to grow new roots, that isn’t where I had to cut off roots… You might already be able to tell that though being such an expert 🙂

OK, so it looks like a few problems, but nothing insurmountable. First – dark basements are not a good idea. When you bring them inside for winter – have them in a sunny window, keep them warm and dry all winter long. Here in Berkeley we would water them every 2 weeks, but if they’re in a dark location, it will take even less water. Very little! But with sun through the winter a little water is good.

The next problem was when you took them out of the basement and put them into a lot of sun. In general, plants that are indoor need to be “hardened off” before they can be brought into a lot of sun. This means taking about 2 weeks bringing them out to progressively more sun so they get used to the UV slowly. Otherwise they can get a sunburn.

So it sounds like you overwatered and they also have sunburn and they have lost most of their roots.

Now you need to unpot them and let them fully dry out for 1 to 2 weeks out of the sun. Then plant them in fresh fast-draining cactus soil.

Keep them dry for another week, and then slowly start hardening them off for the outdoors.