I have a lovely little potted succelent (an echeveria, I believe) that I purchased from you some time ago and it has started to behave oddly. The best way I could describe it is to say it has started “rooting”. Or rather one limb has been sending out root-like shoots for a month or so. At first I thought it would stop when it failed to find land or water to “root into” but it has persisted. I’ve attached photos in order to clarify my poor attempts at describing this. You’ll notice it is only one segment of the plant that is doing this, the other is acting quite normally. 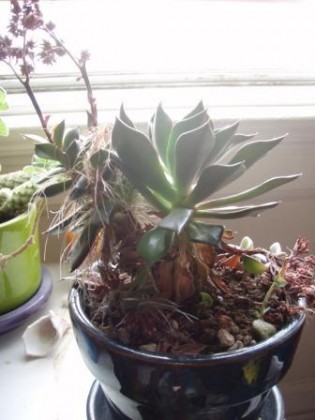 My question: Is the plant begging to be repotted? And if so, should I separate the rooting segment from the main one and transplant it? Or should I just leave it be?

Thanks very much!
Ally

Your plant is sending out a huge number of aerial roots! Odd, perhaps that side of the plant is more humid than the other?. just kidding. Basically you can do any of the options you asked about. If you repot it will get bigger faster, or cut off the root crazed part, let it sit a few days and then pot up in a new pot in dry-ish cactus-succulent soil and don’t water for a week or two. If the roots bother you in a freakish alien sort of way… you can also just cut them off. It won’t hurt the plant.