We often get asked questions about these giant blooming stalks. The news isn’t good.

I bought a small aeonium from you guys a long while back. It now is flowering and I just read that you said it would die after flowering. Should I cut the branch off below the flowering large branch now? thanks RoseAnn

Aeoniums are “almost” monocarpic, the rosette that blooms, certainly dies after flowering and the plant uses a lot of resources to “get frisky”. So I generally cut the bloom off when the first of the flowers open and use it as a cut flower, it actually can last over a month in bloom if you change the water regularly. You can let it bloom out on the plant as long as there are other rosettes on the plant, but it will struggle if it sets seed.

Thanks Hap. Will the other rosettes on the plant die along with it?

Usually the other rosettes survive, but they seem to sulk for awhile before showing normal vigor again. I assume the flowering and seed making hormones suppress their metabolism and active growth. So they can look pretty ratty for a year afterwards.

And just for fun here’s one of our Aeonium “Cyclops” going through the whole bloom cycle thing. I think it’s time to cut cut cut it’s head off. 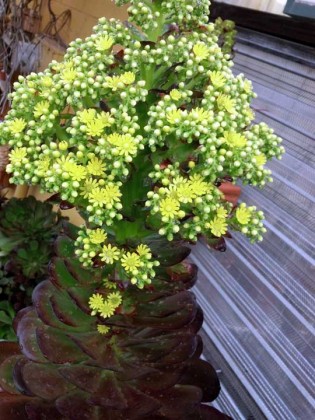