A Profusion of Protrusions 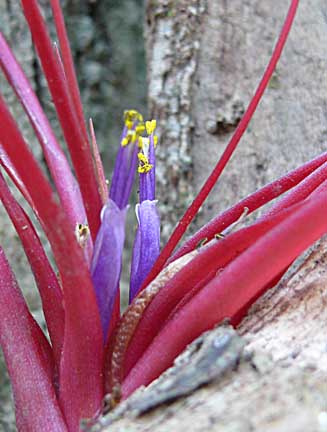 Tillandsia blooms. These look remarkably like the Tillandsia ionantha blooms we get at thre nursery. And T. ionantha is from the central american rain forest. So maybe, just maybe, we have identified a tillandsia species found on our recent trip to Costa Rica.

On the other hand, the rosette is probably too big to be T. ionantha. But it sure is pretty.

Do you kinow how many species of tillandsias there are? Why, there are 400. And if you include all the epiphytic bromeliads, then I believe you’d have at least some more than that, even.