The concept of this new art series of photographs is to present a contrast in scales to make you rethink your vision of the scale and meaning of succulents. For instance, I may say that a particular succulent is 6″ across, and you would believe me, now wouldn’t you. Admit it. But what if I showed you a picture of that same succulent, but with a giraffe in the picture. Now then what would you think? Why you’d first think that succulent was 12ft. across! And then if you looked closely enough you might question the full scale and scope of the giraffe in the picture. You might think it was properly photoshopped into the job, or you might think it’s a gigantic toy giraffe or you might even realize that it’s playful nature has been fully realized in this wonderful portrait.

My new Giraffe series starts on the blog… right…. now! 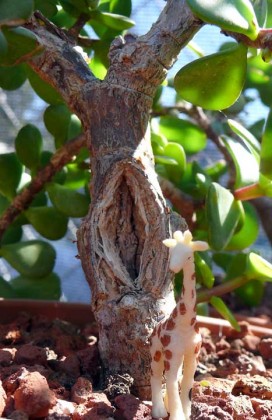