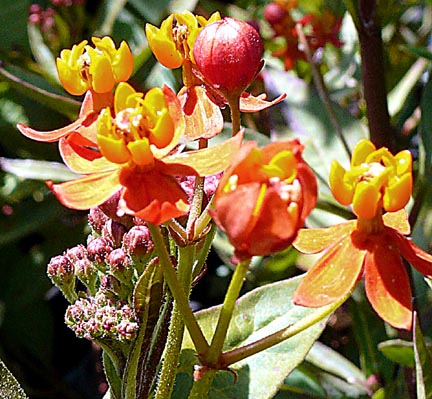 This is really a great plant. It’s shrubby. It has beautiful little flowers. The butterflies are constantly circling these plants. And they die back down to the ground in the winter, with the underground tuber (hence the name…) hanging out til next spring, when the plant comes back bigger and stronger and more flowers.

Plus it’s a milkweed.

Plus I like the dark green leaves with hints of red.

If after all that you still don’t like this, then I feel sorry for you.

Well, that was a little harsh. I apologize if anyone was offended by my previous remarks. 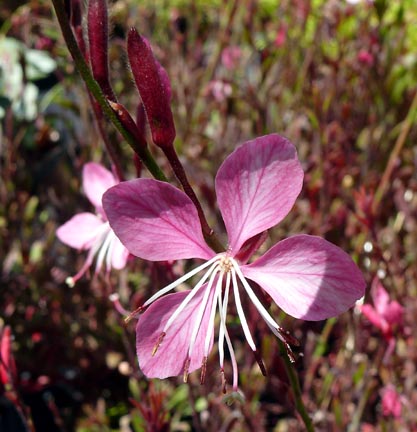 These are strangely wispy plants with upright stems and weirdly stalkless leaves and flowers growing directly on the stems. Rose pink flowers of course.

They’re a wild addition to any closely cropped garden plan. Well, I should rather say that if you are uptight about your garden, then these are just the plant to loosen you up, so to speak, if you know what I mean, wink wink nudge nudge.

Ultimately, the problem is that there are too many California Natives. Too many plants grow wild in this state that we call our home. My head hurts. 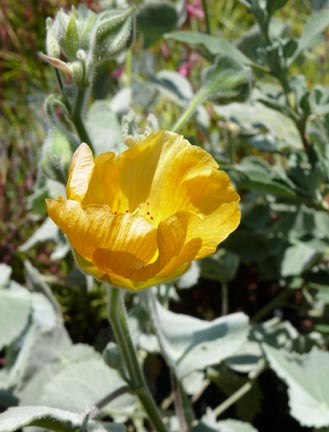 Shrubby to 6 ft. tall, although I’ve only seen them get to around 4ft.

Very heat-tolerant. Fuzzy gray leaves, orange poppy flowers. An astounding addition to any drought-tolerant or native-plant garden. You know you want to lean over and look deeper. Go ahead. 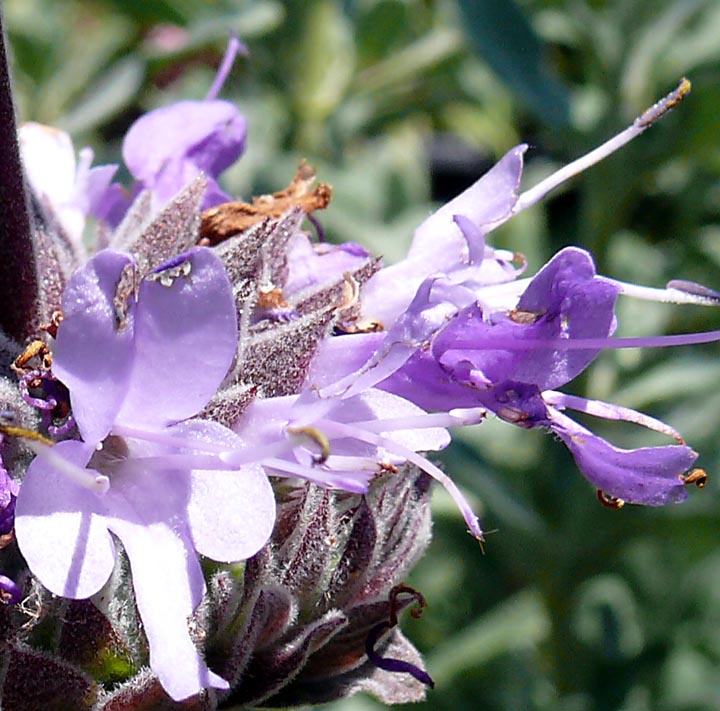 Shrubby to 5′. A Bay Area favorite for years now.

Did I mention the lavender flowers? They are happy for you too. And of course, being a salvia, they have fuzzy grey leaves. (Gray vs. Grey – which spelling do you prefer?) 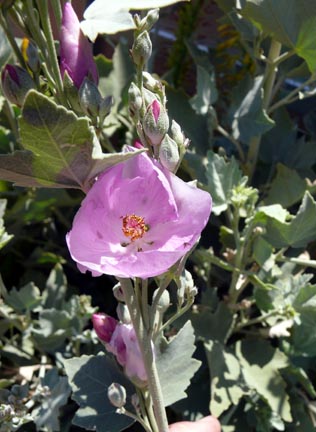 I’ve been waiting for this to start blooming. I love the vertical stems and grey leaves, but it’s been covered in buds for months and finally it has started to pop. I feel so relieved. 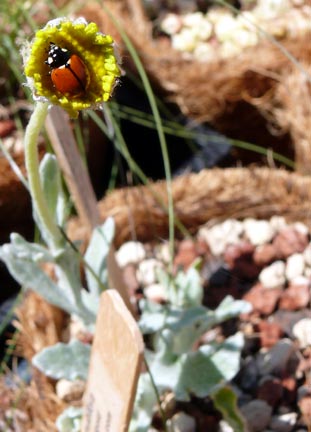 The ladybug attacks before the flower can even open fully.

Here we have our final pictures from our trip along the Sonoma Coast, not including some more shots of Benjamin that will appear on future Fridays I’m sure. 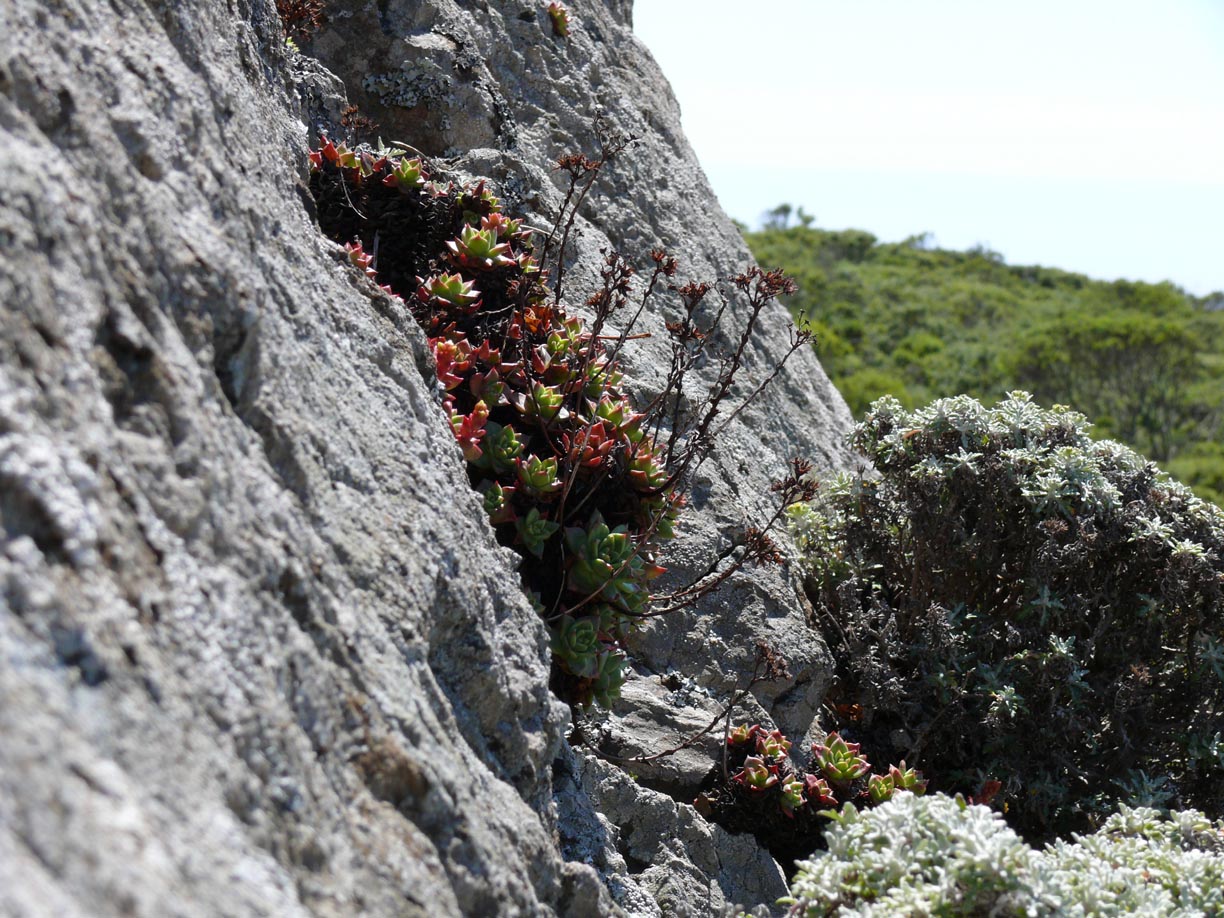 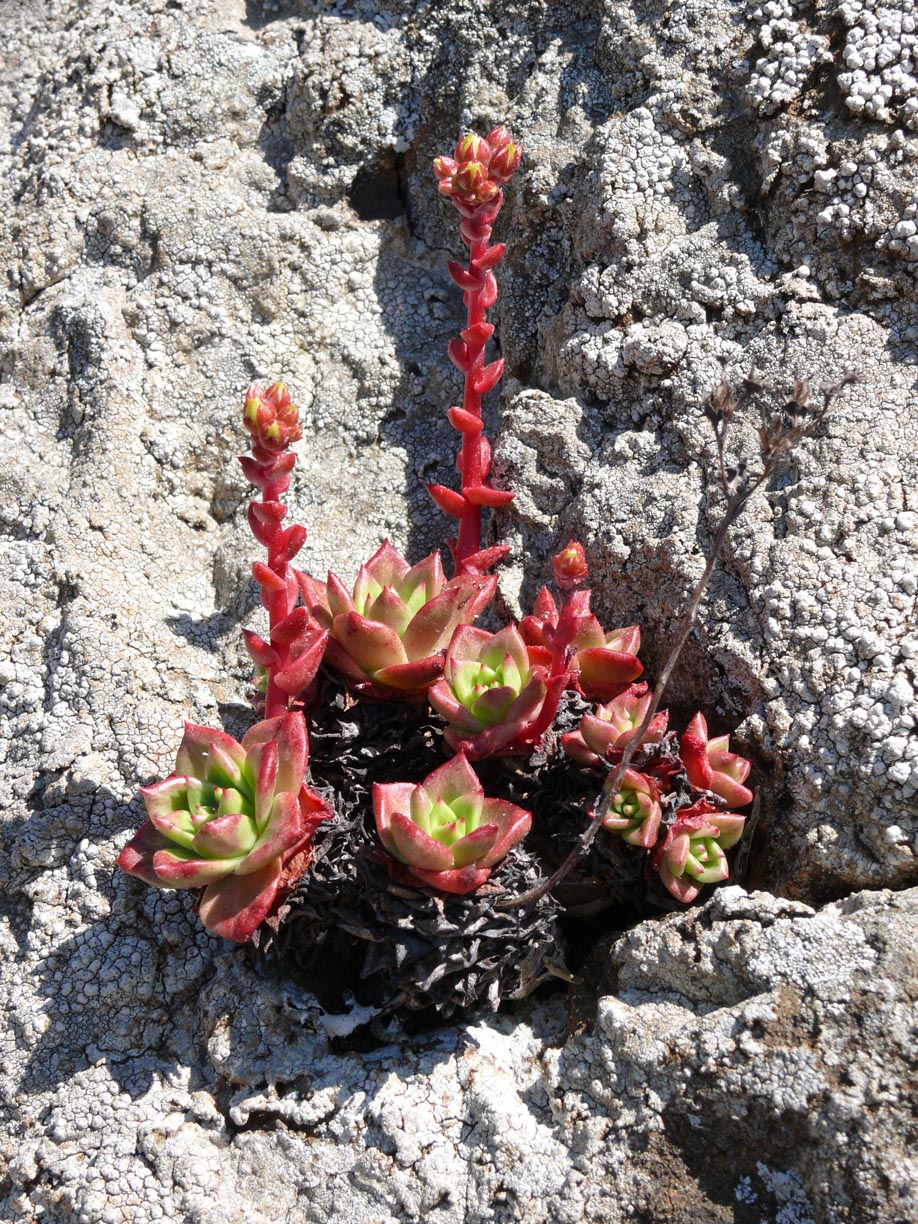 My favorite picture of them all. So bright, so exposed, so wind-swept and salt-sea-encrusted and yet, such a happy plant that it’s blushing for it’s good fortune.

Finally, we get to the Native succulent found in habitat along the Sonoma Coast that you knew was there, but just weren’t sure I had found. Well, now you know. 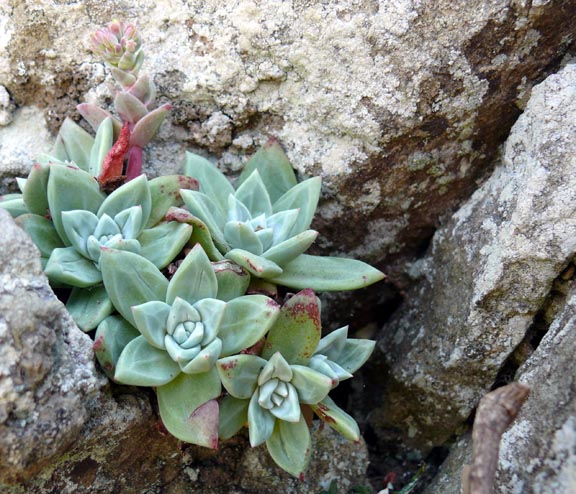 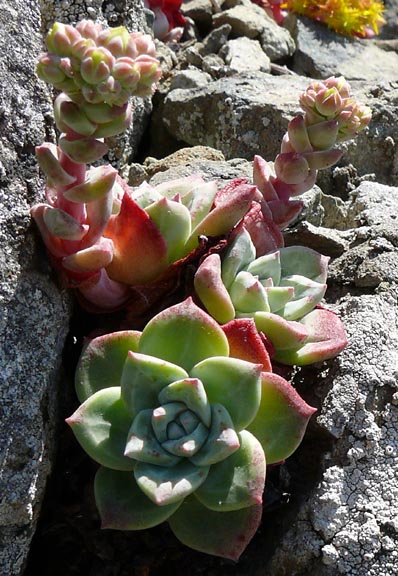 This great plant looks quite different in our nursery, after years of cultivation. Larger leaves, don’t you know. But here you see that they’re sticklers for rocky surfaces. Rocks, even. Crevices with barely a dollop of soil to grow in.

Tomorrow I’ll post photos from a different stand of them. More exposed.

I know you’ve all been slogging through my week-long fascination with native shrubs and wildflowers found along the Sonoma Coast, and were wondering when I would get to the succulents. 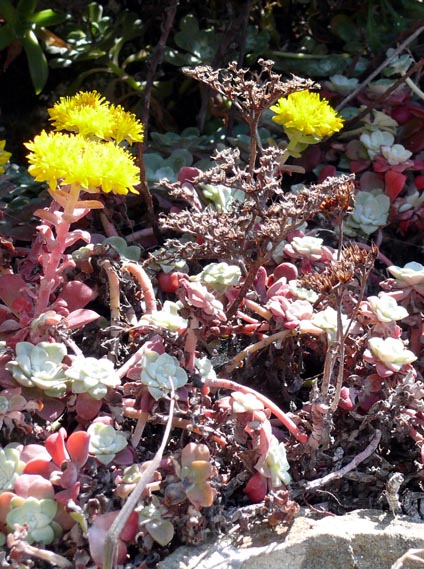 We grow this Pacific Stonecrop and it sells like hotcakes on a frigid morning at the high school football game. Other sedums are quite popular too. But this one is special, because, you know, it’s very nice.

I can’t be sure what this is since it’s not in bloom right now, but i think I’ve found a rare coastal buckwheat. 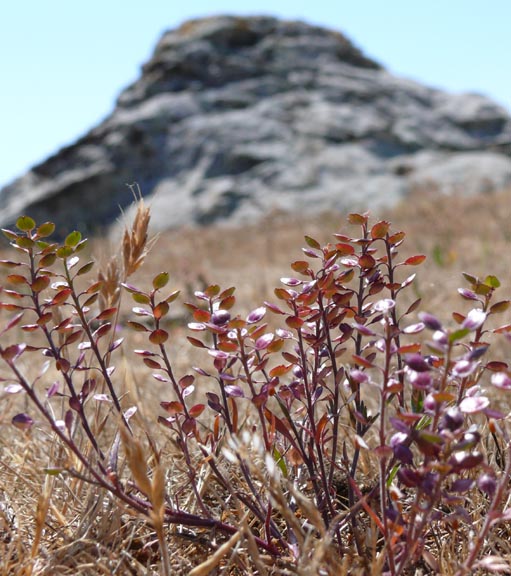 Yesterday we featured a yellow yarrow, as found on the Sonoma Coast. Today we find a white yarrow. 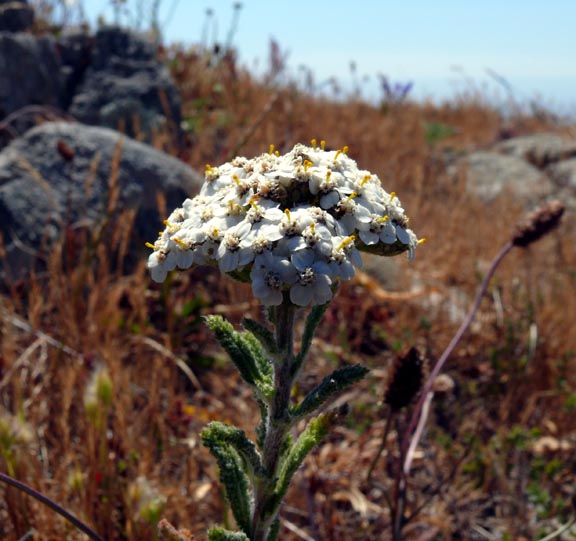 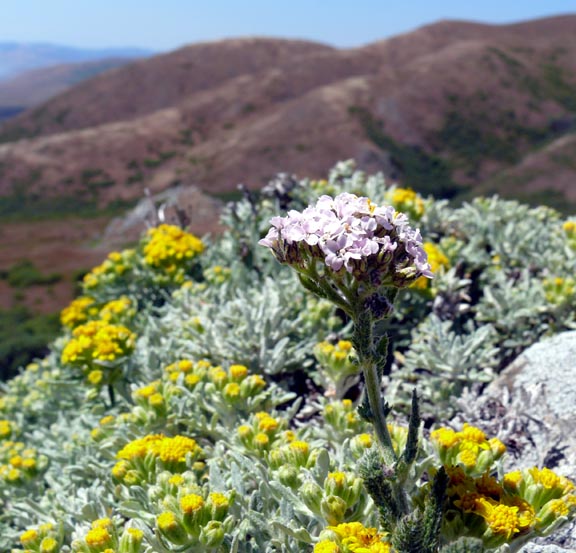 These uncultivated varieties of yarrow come in yellow and white on the Sonoma Coast. Here’s the yellow version in amongst the rocks. 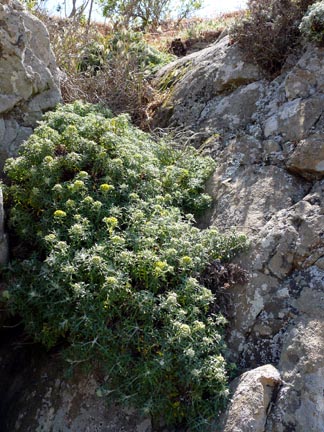 And from above, another stand of yellow yarrow: 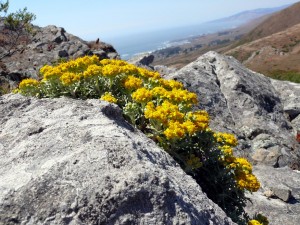 Here’s an interlude in our week-long festival of Sonoma County native plants. 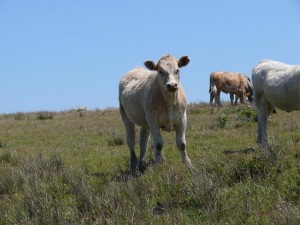 It’s a cow. Now, to be sure, she’s trampling some native plants even as we speak.

From the coast, the Sonoma Coast, which you should be able to identify now from the wide sweep of the photo. 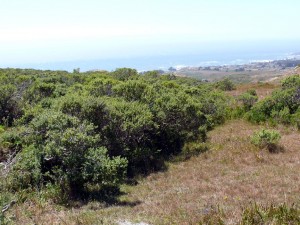 Baccharis pilularis is a great native shrub for your front yard. You should look into getting one. Do you see how beautiful they are in these wind-swept areas? Well, now imagine them up against your house after you’ve painted it a nice eggshell blue. Now that’s class.

Another photo from our Sonoma foray. 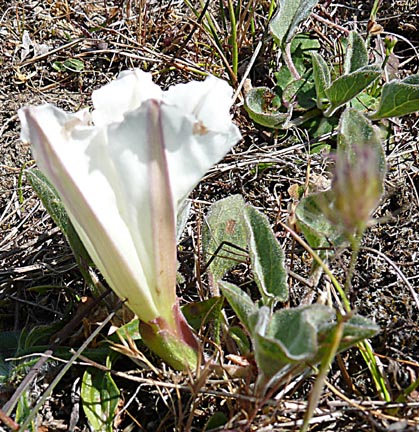 Calystegia collina ssp. collina does not appear to be available in cultivation, probably because it’s tiny, but maybe because it’s too cute, too beautiful to be able to properly photograph and thus veritably impossible to advertise. At least, that’s my excuse for an out-of-focus picture.

More from my walk along the coast in Sonoma County. 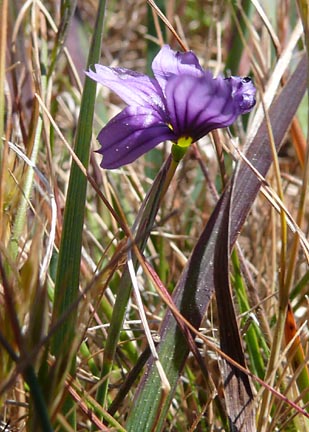 In cultivation these get quite large, clumps to 1 ft., with dozens of blooms for months on end. In these more natural, i.e. harsh, conditions, they’re tiny little plants with one flower at a time. But the flowers are just as blue as ever. 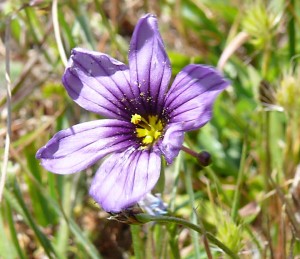 In this closeup we can see the pollen. Seems like some bees have been by here recently. Unless it was the cows nearby that were pollinating the flowers.

First up we have a rare lupine. 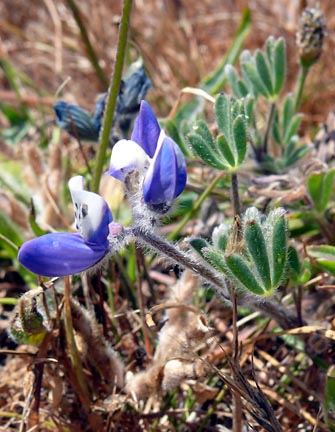 It’s small, and rhizomous, and not very widespread at all. But aren’t they adorable.

I’m not aware of this being in cultivation anywhere, maybe because it’s so small. But presumeably with better conditions it would get bigger. The leaves are quite pretty and the seed pods were in all stages of ripenesses. 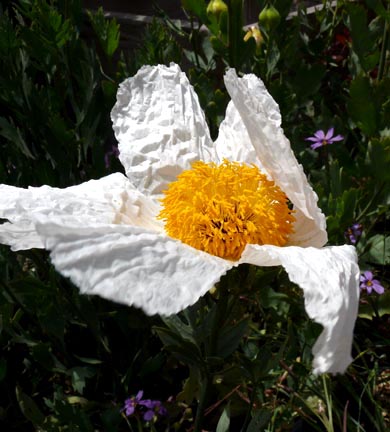 Spectactular giant California poppy blooms on top stems that can get to 8′ tall. You can see them from miles away. Nows a good time to see them in bloom, since they’re now in bloom. They do have an underground rhizome – difficult to establish, easy to spread.

They belong in the back of a succulent garden, up against the house assuming you don’t have a white house. 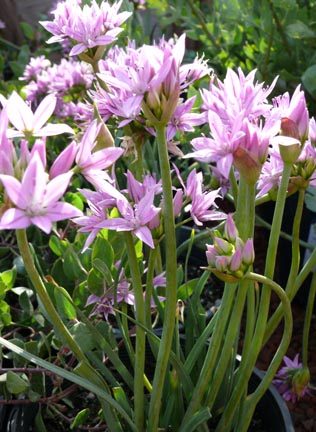 Interesting that the common name and the latin name are the same. Someone must really think that one-leaf aspect of the plant must be really important.

They have pretty flowers. I wonder if they taste good? They bloom all the way through to July. Of course, they’ll die back in winter, and then the bulb expands and grows and comes back next spring. When not in bloom, they look like a grass.

Jim at the Palm Springs Desert Sun spends a day in the desert to find the local Mojave Fishhook Cactus. And finds one!

With the discovery of this one, known to botanists as Sclerocactus polyancistrus, my list was complete. I had found and photographed every kind of cactus known to exist in the deserts of California….

(T)his species is rarely abundant even in favored habitat…. The other factor making it difficult to find a Mojave fishhook is that each specimen looks very much like a browsed clump of bunch grass.

Sounds like Jim has been busy finding cactus in California.

I wish I were a bird. Then I would eat these lovely manzanita red juicy red extry red berries. Maybe I should eat them anyway. 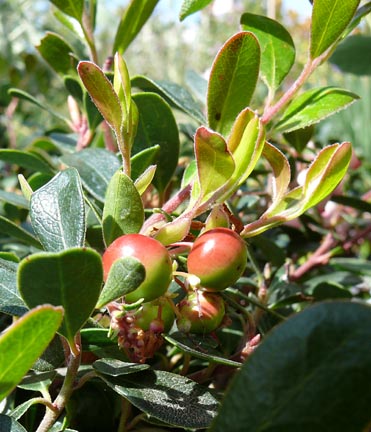 Arctostaphylos “San Bruno Mountain” also known as the Bearberry. I wonder why?

The Sisyrinchium californicums have started to bloom! 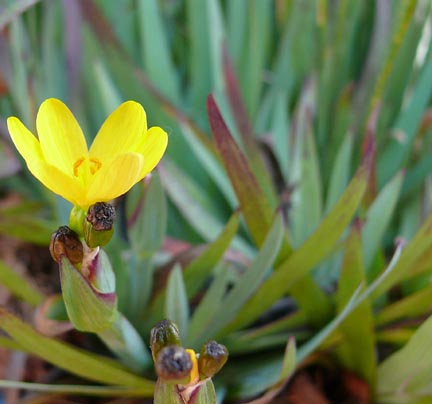 …that the short post I posted last week could use a little more filling out. 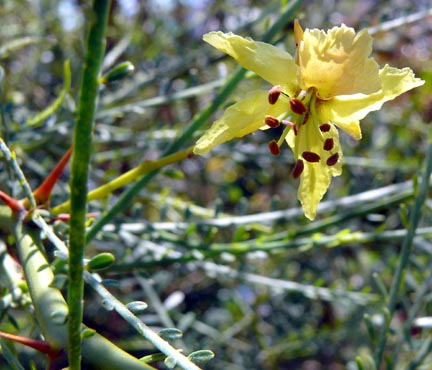 Now I can understand if you liked the original “Short Post” as it was, but you know, it was inevitable that I would photograph the tree when it came into bloom, and then I would be forced to type a full post about it.

It’s the Mexican version, because, you know, the California native Palo Verde doesn’t grow in N. Cal. We’ve killed about a dozen babies trying to get them to grow, but please don’t tell the woman who sold them to us, because she was very protective of them and didn’t want to sell them to someone who would kill them and we convinced her we would take good care of her babies, and then BAM! we go and kill them anyway, so now it’s Mexican Palo Verde or bust.

Arctostaphylos pajaroensis “Paradise”
This is one of my favorite manzanitas. Great leave color and texture, beautiful bloom sprays, and delicious berries (for the birds).

This specimen was photographed at the UC Berkeley Botanic Garden.

Calystegia macrostegia
Great twining vine, works well climbing on fences locally. Will bloom for much of the year, and will go dormant in the summer if you let it go dry. It’s a Coastal favorite, though it also comes from some of the srubbier chaparral areas of California.

Fremontodendron San Gabriel
The Flannel Bush gets a whole heck of a lot of these very graphic thick yellow flowers. And I mean that the color is thick, not the petals, although they are too.

These are a great plant to espalier if you have the right place for it. On the other hand, they are a definite allergen to about 1/2 the population if you rub up against them.

On the 3rd hand, there’s always a little brother who can be tossed into the flannel bush to see what reaction your family might have to it.

We like the Ceanothuses. These California native shrubs range from 6″ tall to over 20 ft. Here we have a cultivar that gets 3ft. tall and can spread over 10 ft. wide if you let it. It was cultivated right here in Berkeley at the UC Botanic Gardens from a specimen found up in Sonoma, so you know it will do well in local gardens.

Small rigid green leaves, like holly. Shrubs only to 3′ tall. I would say these California Lilac flowers are “lilac” in color. The very definition, even. We commonly use this plant as a shrub in low-water gardens. Works well near traffic areas where you don’t want a cactus poking you, but still want something vigorous that can stand up to kids or pets.

Herbaceous perennial. These furry grey stems are generally upright, but can lay prone as they grow. Stunning clusters of purple and white pea-sized flowers are bursting out in spring. Evergreen grey-green oblong leaves. It’s a lovely plant year-round, but a show-stopper right about now.

Native to San Diego County, California, rare in the wild.