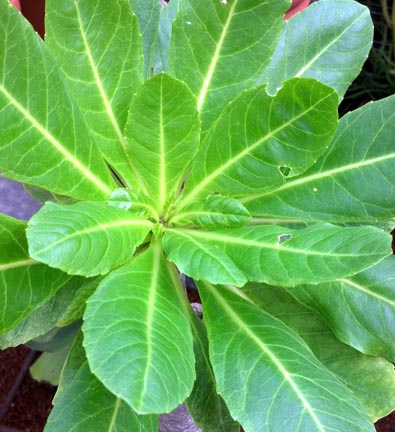 Brighamia insignis is a very rare and endangered plant from Hawaii. However it has recently become a bit more common in the nursery trade, so not quite so rare and unusual as a few years ago. This particular specimen is quite lovely, don’t you think? A very full head of leaves. There is a trunk too, I wonder what it looks like?

Oh, so that’s what it looks like. You can see the spots on the trunk where the old leaves fell off. I wonder if there’s a name for that?

So what more do we know about this plant?

Brighamia only survives on the 3,000 foot high Na Pali sea cliffs, on the Hawaiian Island of Kauai.

This plant was once common on the four highest Hawaiian Islands… Sadly, there are now fewer than 100 Brighamia plants on Kauai….

The Brighamia‘s environment has been disturbed so much that the species of insects, which were specially adapted to pollinate the Brighamia flowers, have become extinct. Scientists from the Conservation Department of the National Tropical Botanical Garden in Hawaii use ropes to lower themselves partway down the steep cliff faces to pollinate the remaining wild plants by hand.

We also know that it has yellow flowers.