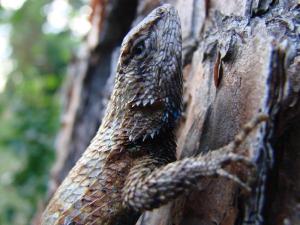 ScienceDaily (Jan. 24, 2009) — Penn State Assistant Professor of Biology Tracy Langkilde has shown that native fence lizards in the southeastern United States are adapting to potentially fatal invasive fire-ant attacks by developing behaviors that enable them to escape from the ants, as well as by developing longer hind legs, which can increase the effectiveness of this behavior.

Now that’s some change we can believe in.