Well, I’m testing out the power of this garden blog. We have a plant we have been growing for many years. So many years, in fact, that we never checked the name. Our original parent plant came with a name, and back then we didn’t really check them out. Now it turns out this name doesn’t exist in any references, except our own site.

What is this plant? We call it Pachyphytum hassei. 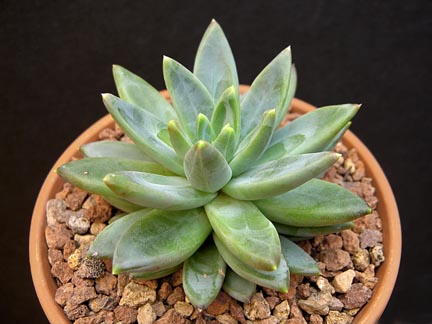 Any ideas? It may be an Echeveria, or a hybrid Pachyveria. It’s not a Dudleya. I don’t think we’ve ever seen it bloom. Not that any of us remember.

Apparently this is a more rare form of this plant. 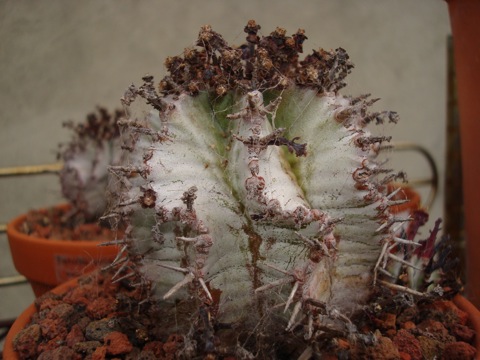 They can grow to 3′ tall, getting wavier as they go. Tiny unisexual flowers are grouped into cyathia. The seedpods have caruncles.

I love the Smithsonian. I always visit another one of their museums every time I’m in Washington. Plus, I go back to the Air + Space each time too. Lunar modules make me giggle. 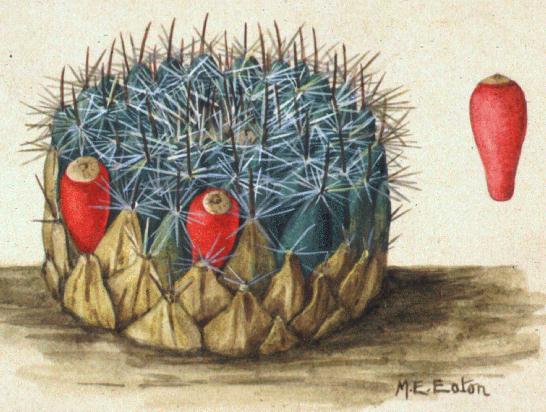 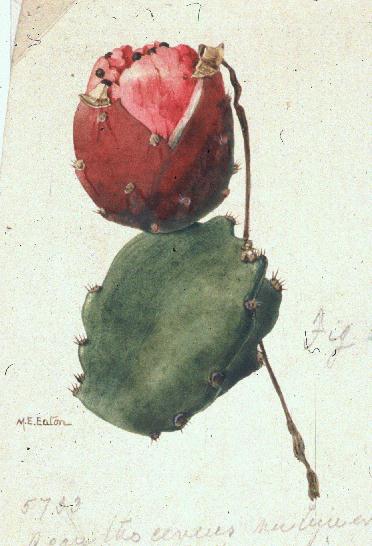 The world’s smallest snake, averaging just 10cm (4 inches) and as thin as a spaghetti noodle, has been discovered on the Caribbean island of Barbados. 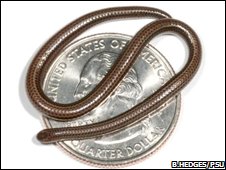 The snake, found beneath a rock in a tiny fragment of threatened forest, is thought to be at the very limit of how small a snake can evolve to be.

Found under a rock. Well, that just beats all. I wonder where it found the quater?

I previously blogged this plant in bloom and that bloom was a lot less red than this one, but taken at an angle that really showed the “torch” character of the flower.

Here we get to see the depth of the red. 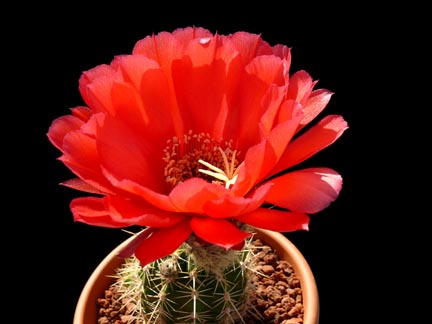 I like to use this plant when in bloom as an example at the nursery for natural variations of a single species vs. labeling every cultivar with a “name”. So I’m sure I could take the more orange one, and cultivate it for the orange blooms since they pup readily, propagate a whole messload of clones, and give it a name like, Echinopsis huascha “Fairy Tale Princess”. But I prefer to see them all as individuals, even when cloned, and to respect the natural variations without resorting to separating them into new cultivars.

I suppose this means I see nature more as a continuity than as a series of discrete species. Botanists will be outraged! Does that make me bad? 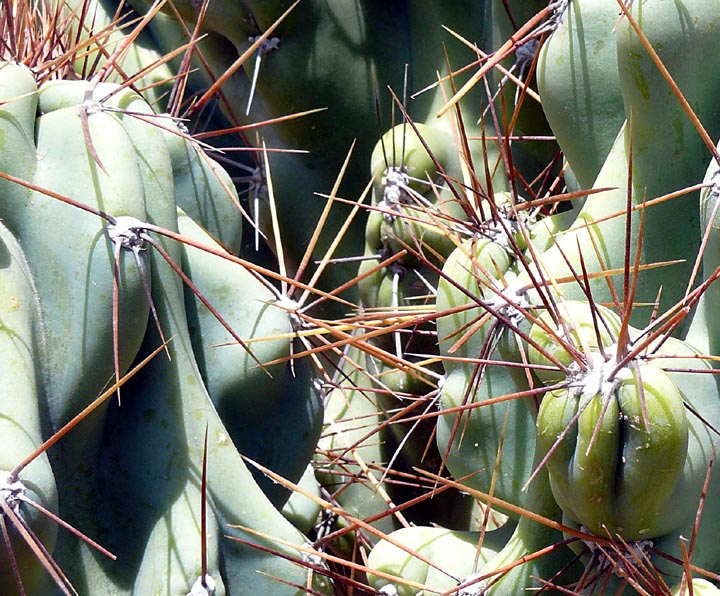 Cereus c.v. monstrose – Each is a clone of a virus-ridden parent. Many variable parents give us many variable monstroses.

In case that wasn’t entirely clear, what’s going on is a perfectly normal smooth vertical cactus like the Cereus peruvianus from Peru catches a virus and the resultant form is known as a “monstrose.” Sometimes, you get a crested plant, but in this instance, you get this monstrous form of all these bumpies up and down the trunk. Good stuff.

Now, if you let it go to seed, generally the virus will not be transmitted to the babies, and the plant will revert to its original form (which it can do anyway). So you propagate these exclusively by cuttings. This means that any individual variations in the monstrosenesses will be carried identically by the cloned babies. And any variations between plants means they came from different virused parents.

Is that more clear?

Now if you would like to know more you can find it here.

Many cacti and succulents grow… with an apical meristem, the dominant bud at the very top that contributes to its pyramidal form… This gives them their symmetrical shapes. Occasionally something happens to that meristem and it mutates. One growth point turns into many, forcing the top of the plant to fans out into a series of mini-points. The result is that the top of a pointed cactus produces a crest that can look very much like a rooster comb.

In other cases, the mutation may occur throughout the plant, not just at the top. Growth points originate all over the stem or branches causing very irregular growth. The result is a monstrosity, and while the plant remains the same species, it may bear very little resemblance to its kin.

Oddly enough an occasional crest, or monstrose, branch will appear on a normal plant. Sometimes a monstrose plant will revert to normal growth. It’s a genetic crap-shoot and Mother Nature holds the dice.

A customer wanted to know what the name Aloe cryptopoda means. Crypto means false, hidden, fake; poda means foot. Well, that doesn’t make any sense. So I looked it up.

It really is derived from “Hidden Foot”. Because the base of the bloom stalk is hidden by the plant’s leaves. That is the dumbest excuse for a latin plant name I have ever heard.

Every now and then I read through published articles on the science of cactus, and then post my analysis of the quality of the science.

This is not one of those times.

Instead, I pass along this abstract from National Center for Biotechnology Information on Tissue Cultures of a Cactus.

Tissue Cultures of a Cactus.

Tissue cultures have been established from stems of Trichocereus spachianus (Riccob.) for the purpose of studying alkaloid biosynthesis in cactus tissue. On a basal inorganic medium supplemented with glucose, coconut milk, and 2,4-dichlorophenoxyacetic acid, three distinct types of callus are initiated. One is greenish, compact, and slow-growing; another is firm and yellowish, with a moderate growth rate; the third is very friable and rapid-growing. The growth habit remains constant for a given clone in successive subcultures.

Now, I don’t purport to understand this. In fact, I can state categorically that I have no idea what this is about. However, since I run the number 1 cactus blog on the world wide web I am contractually obligated to present information that even I don’t know a thing about, and never will. So here you go.

If anyone can abstract this abstract down to one clear sentence, I will pay you $5.99, or send along a very lovely Echinopsis.

“The year which has passed has not, indeed, been marked by any of those striking discoveries which at once revolutionize, so to speak, the department of science on which they bear.”

Such is life. The next year The Origin of Species was published and he must have been slightly embarrassed at his mistake.

On the other hand, that was the same year as the discovery of cactus in the new world, so it was embarrassing all around. (Of course, I may be wrong about the date a little bit, and I may end up being a little embarrassed about that myself. Only time will tell.)

If the sea rocket detects unrelated plants growing in the ground with it, the plant aggressively sprouts nutrient-grabbing roots. But if it detects family, it politely restrains itself. 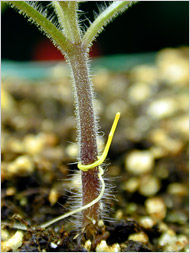 A dodder after it attacked a tomato plant. Photo: Justin Runyon/De Moraes and Mescher Labs

I always knew it. I’ve argued it for years. Now we’ve got the possibility that vegetarians have been eating intelligent life forms all along. And they were delicious. Of course, based on the article, it wasn’t the tomato plant that was intelligent….

Well, we’ve been calling this one C. vulpis-cauda, but NO! Now that it’s bloomed, we have a better idea what it might be. 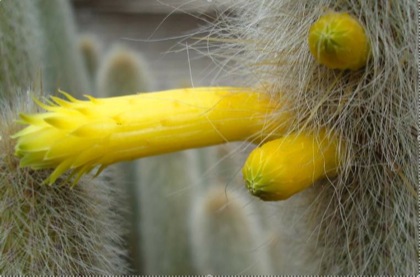 It’s Cleistocactus ritteri. Change all your labels, fix that small place in your brain where this cleisto is filed, and get with the program. 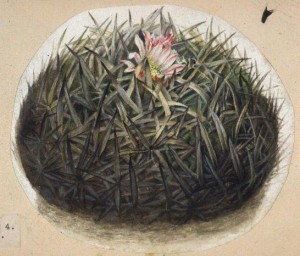 From the Catalog of Botanical Illustrations, Department of Botany, Smithsonian Institution

OLETE MAIA from Brasil sent me a published report from 1977 on the nutritional content of Pereskia leaves, among some other documents I’ll be looking through too. On the other hand, I’m not a scientist, so at best I can read the abstracts. But this one has a picture to go with it, and a lovely picture it is. 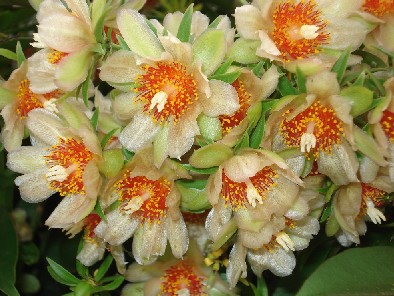 It seems that Brasilians have been eating the leaves of the Pereskia aculeata and nobody had bothered to check on their nutritional value before 1977. After checking,

It’s protein content is 25.4%… suggests it is a good protein source…. On the other hand some leaves do not yield protein concentrate of good quality.

The rest of it is equations and tables and percentages.

Previously in our saga, the Venus Fly Trap caught a slug. And it was good. Apparently very good. Delicious even, because the slug seems to have died and become dessicated and mostly consumed by the plant.

It’s not as disgusting as the previous photo, but it’s entertaining in its own right.

Just try not to look closely. Examine how much more there is for the plant to consume….

If you like, I can post a bigger version of this, even more closeup. Or would that just be piling on?

Don’t scroll down if you don’t have to.

It caught a slug. It’s eating a slug.

It’s fascinating. I can’t look away. My eyes are burning, oh the burn, it hurts.

My Northern Garden lets us know that your local city water may be more alkaline than you think. And if you’re not thinking about it, then maybe you should get out a pH tester right now.

Malcolm (Burleigh) and one of his cactus-growing friends from California had discovered that city water tends to be much more alkaline than rain water and that the change in pH made a big difference in plant performance….

Adjusting pH for houseplants is one thingan entire garden is another. Malcolm uses a watering system that involves a sump pump, a 45-gallon garbage pail, and an octopus hose system.

It’s science day at cactus blog, and so we bring you <a href="https://cactusjungle.com/archives/blog/exit.php?url_id=1736&amp;entry_id=1539" title="http://science.letusfindout.com/do-cacti-have-leaves/" onmouseover="window.status=’http://science.letusfindout.com/do-cacti-have-leaves/’;return true;" onmouseout="window.status=”;return true;">to the world of science</a>!<br /><br /><div style="margin-left: 40px;"><span style="font-style: italic;">Q: Do cacti have leaves?<br /><br />A: In most (cactus) species, except for the sub-family of the Pereskioideae, the leaves are greatly or entirely reduced….<br />
<br />
Cacti are commonly used for fencing material where there is a lack of either natural resources or financial means to construct a permanent fence. This is often seen in arid and warm climates, such as the Masai Mara in Kenya. This is known as a cactus fence.</span><br /></div><br />

Too much family hanging around? Feeling a little woozy from the Uncle and his Ron Paul talk? Did you just drink too much yesterday and now you’ve woken up with <a href="https://cactusjungle.com/archives/blog/exit.php?url_id=1728&amp;entry_id=1531" title="http://www.thaindian.com/newsportal/health/sliced-cactus-can-cure-your-hangover_1009416.html" onmouseover="window.status=’http://www.thaindian.com/newsportal/health/sliced-cactus-can-cure-your-hangover_1009416.html’;return true;" onmouseout="window.status=”;return true;">a hangover?</a> Well, it’s too late for cactus to help. You should have eaten a pad before you started drinking at 7am yesterday morning.<br /><br /><div style="margin-left: 40px;"><span style="font-style: italic;">A new study has revealed that eating the prickly plant before boozing prevents post-alcohol sickness and headaches. Researchers at the Tulane University, New Orleans say that the cactus atypical carbohydrates obstruct the gut absorbing too many sugars. Many of the health benefits of cactus are related to its water-retaining properties, The Sun quoted lead researcher Prof Tony Blake, as saying. It is a good source of vitamins A, B, C and K and contains many essential minerals, he added. </span><br /></div><br />Now you know, so you have no excuses for the future. And it makes a delicious aperitif too.<br /><br />

Mythbusters used some of our cacti as set dressing for the episode where they tested chile pepper myths.

Here’s a short video clip that we’ll leave up until they threaten to sue.