According to the garden writer in Appleton, Wisconsin the succulent trend has reached home.

One of the most popular trends in wedding arrangements is the use of succulents.
Garden Talk with Rob Zimmer

OK, go to it, all you cheeseheads.

(O)ur inexorable path toward robot domination becomes ever more clear. LG has announced a series of smart appliances that will be “controlled” by your Smart Phone and can do things like… even suggest recipes based on what is in the fridge.

Now that is awesome! What’s for dinner? Let’s ask the fridge. I love you LG.

Newt Gingrich, in the 80s, wrote this:

“The third-generation shuttle of the year 2020 should offer… a typical couple… a honeymoon trip into space for around $15,000.”

“Neither reasonable, nor fair, nor adequate, nor in the public interest.” Federal court judge Jed Rakoff on a proposed Citibank settlement.

If you have to deep fry the turkey tomorrow, please do it at least 25 feet from a flammable structure.

Words to the wise, indeed.

A Phoenix native living in Franklin, Mass., or thereabouts, schools you on your cactusey language.

The general public would (be) more surprised to learn that cactuses is an acceptable plural form of cactus, not just cacti.

So true. Also, cactus is both a singular and a plural form and cacticularies is an archaic plural. I just made up that last one.

I don’t do these very often any more, but sometimes politicians get pretty bizarre. From Mitt Romney we find out the startling truth:

Wow! An extremely wealthy man running for President is now “Unemployed”. Does that mean he’s sending out resumes and checking craigslist?

“I literally could not care less if I were in a coma.”
David Rakoff in Salon

A unionized public employee, a teabagger, and a CEO are sitting at a table. In the middle of the table is a plate with a dozen cookies on it. The CEO reaches across and takes 11 cookies, then looks at the teabagger and says “Watch out for that union guy—he wants a piece of your cookie!”

This version via Balloon Juice, although I’ve seen it elsewhere too.

But the last group of Moscow’s dogs is by far the most amazing. They are the beggars, for obvious reasons. In these packs, the alpha isn’t the best hunter or strongest, it’s the smartest. The most impressive beggars, however, get their own title: ‘metro dogs’. They rely on scraps of food from the daily commuters who travel the public transportation system. To do so, the dogs have learned to navigate the subway. They know stops by name, and integrate a number of specific stations into their territories.

Forty-five percent of Catholics did not know that their church teaches that the consecrated bread and wine in holy communion are not merely symbols, but actually become the body and blood of Christ.

(C)entral bankers, finance ministers, politicians who pose as defenders of fiscal virtue — are acting like the priests of some ancient cult, demanding that we engage in human sacrifices to appease the anger of (the) invisible (bond) gods.
Krugthulhu

What the heck, another video today because of the rain. It’s been all over the Senator Stevens Memorial Inter-Tubes today.

And the quote of the day is towards the end of this lovely middle class jewish video,

Thank you and good night!

Yes, the Democrats are corrupt and inept. But the other side is batshit insane.

What so many liberal critics really want in a Democratic president now is someone who will denounce the wealthy and punish the barons of industry (and insurance).
Matt Bai, NY Times

Name them. No, what we liberal critics want is not to denounce and punish, but actual policy progress in the form of a new regulatory regime to prevent this kind of financial meltdown from happening again.

If a company, and especially a bank, is too big to fail then it should not be allowed to get that big, and if it is that big and must be bailed out, it should also be broken apart at the same time – not to punish anyone, but to prevent it from happening again.

If a company fails and must be bailed out, then the executives should not be getting multimillion dollar bonuses – not because we want to punish them, but because they are now receiving taxpayer dollars and nobody on government welfare should be receiving such sums, least of all the individuals most responsible for the global financial meltdown.

The only way to stop this kind of looting is to reregulate and enforce the antitrust laws that were put in place 100 years ago to prevent exactly this kind of meltdown from happening after the experience of the 19th century’s series of meltdowns.

Kathleen and Don have been applying Pendulum to the Chinle Cactus and Succulent Society xeric garden at The Arboretum for several years. …

I don’t know what that means, or where that is, but I like the poetry of the line. If you click through and figure out the details, let me know in comments, OK? I don’t have time to read the whole article right now, what with a retail nursery business to run…

I’ve avoided using any of the many fine recent quotes from Gov. Sanford of SC, and Gov. Palin of AK, until today.

“I think on a national level your department of law there in the White House would look at some of the things that we’ve been charged with and automatically throw them out,” (Palin) said.

Here, have a picture of a cactus flower: 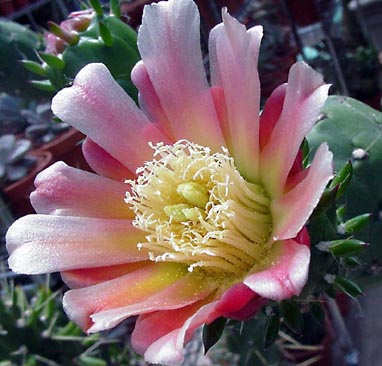 I think this qualifies as a quote of the day

The Botanic Garden in Balchik, Bulgaria… is famous for its collection of succulents and cacti.

There is so much more I want to know, but I know not.

About 90 Krueger Middle School students got an early jump on the activities at this week’s BioBlitz at the Indiana Dunes National Lakeshore.

The event, sponsored by National Geographic, is bringing in thousands of scientists and other volunteers to catalog as many plants and animals as possible….

Now the quote of the day:

“We even have cactus in the dunes,” Jaden Lance noted.

I like that. “We even have cactus in the dunes” would be a good title for my next book. (OK, my first book, but you get the idea.) Now how about a coda:

A seventh grader found a ladybug crawling along a blade of grass and showed it to a few classmates.

…the student-run nursery offers water-smart succulents, propagated by the kids themselves…

Shall I explain? Shall I tell you it is in Santa Rosa and the sale was last week? Shall I go further and provide a photo?

But I will tell you how smart those kids are, propagating water-smart succulents.

Well, this is a first; a quote from Andrew Sullivan.

The punishment for these crimes was the death penalty.

See here for the full context.

‘Today there is much focus on our rights,” Justice Thomas said…. “Shouldn’t there at least be equal time for our Bill of Obligations and our Bill of Responsibilities?”

Funny, I don’t remember there being a “Bill of Obligations” or a “Bill of Responsibilities” in the Constitution of the United States of America. But since Thomas is an originalist who interprets the Constitution the way the founders intended, I suppose it must be in there somewhere.

“There is no reason to say that I’m the illegitimate grandson of an alligator.”

There’s so much recent news of the looting of the American taxpayer by the banking, insurance and financial companies. Geithner’s lack of action to AIG’s bonuses could be the precipitating cause of some serious pushback. But anyway, this little article in the NYTimes really gets right to the heart of the ongoing screwing of the American public by those responsible for crashing the system.

“A 29-year-old man who works for a large investment management firm and was at Bagatelle’s brunch (racking up four- and five-figure tabs) one recent Saturday and at Merkato 55’s the next, put it another way:

“If you’d asked me in October, I’d say it’d be a different situation, and I don’t think I’d be here. Then the government gave us $10 billion.”

I haven’t done any political quotes in a while, and I don’t really want to. But then along came these 2 quotes from the Conservative Political Action Conference. I must quote them. You cannot stop me.

“My Bad”
Michael Steele (RNC) on the last 8 years of Republican governance.

From my parents’ congressman (at least my Mom votes for him):

Rep. Barney Frank (D-MA): “[Obama] says we only have one president at a time. I’m afraid that overstates the number of presidents we have. He’s got to remedy that situation.”

Whoever is training their babies to vote for Obama must know that they are not old enough to vote! I believe this should be looked into by the Bush DOJ. Vote fraud by babies is still vote fraud.

via Yes We Can (hold babies).