…the prickly pear cactus, a humble plant that, according to a new book co-published by the United Nations Food and Agriculture Organization, can serve as a lifesaving crop for many countries…

Click thru to see the rest of the instructions.

The state's had one of the wettest winters in years. pic.twitter.com/w3INRv9gpC

Are they in your garden?!? 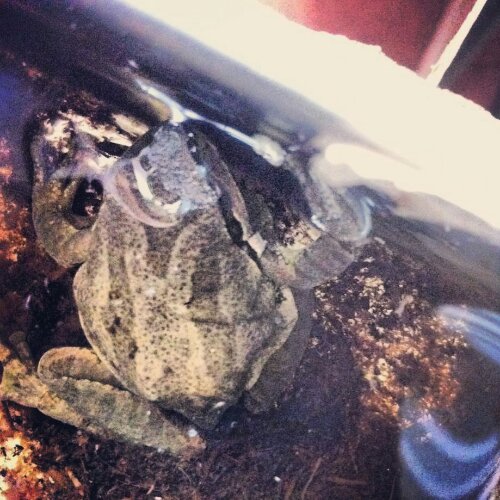 I know this is not a regular feature of this blog, but baby caimans are too cute not to share. 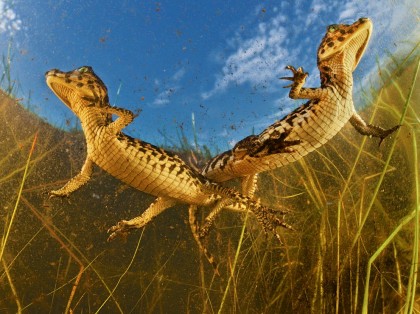 Species are once again starting to get protected.

The Obama administration issued a new “candidate notice of review” today identifying 244 plants and animals that need the protections of the Endangered Species Act to avoid extinction….

Florida semaphore cactus: The Florida semaphore cactus has been waiting for protection for six years. It is a large prickly pear cactus from the Florida Keys that was thought to have been driven extinct by cactus collectors and road construction in the late 1970s but was rediscovered in the mid-1980s. Much of its historic habitat has fallen prey to development, destruction and fragmentation. Just two populations remain….

Sonoyta mud turtle: The Sonoyta mud turtle has been a candidate since 1997. In the United States, it has been reduced to a single reservoir in Arizona that is isolated from populations in Mexico. The turtle eats insects, crustaceans, snails, fish, frogs and plants. Females bury their eggs on land.

Poor turtles left to live in the mud of just one reservoir.

Monterey is a nice place. They no longer have the stink of the famous fish canneries, so it’s a good place to visit on a warm weekend afternoon.

And now they have a community green roof project too. Good for them.

After five weeks of planning, workers planted more than 600 bushes, succulents, flowers and grasses of 42 species on the soil-covered roof of the green building next to Carmel Middle School on Wednesday morning. The roof was specially constructed to support 6 inches of soil, vegetation and a special system to recycle rainwater to irrigate the plants….

It joins an organic garden, an outdoor kitchen, demonstration gardens and greenhouses, an amphitheater for ornithology, and owl boxes…. 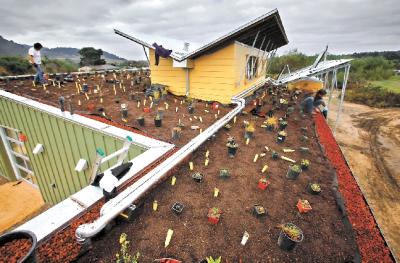 Most of the plants on the new roof are habitat plants, chosen to feed and house insects and birds. (VERN FISHER/The Herald) 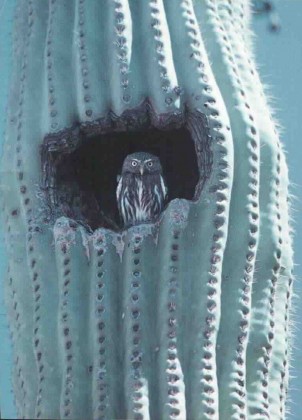 Succulents are the latest in green technologies. You can find them at all the best green expos around town.

Save Energy, Water and Money
Pros and volunteers come together to educate the public at the weekend event. 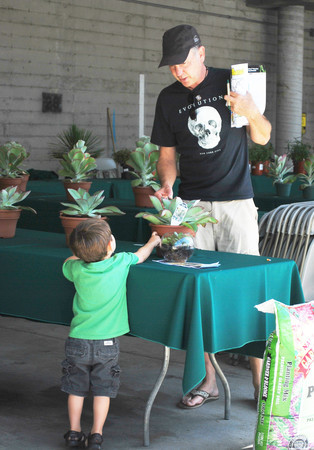 Jasper Kahn Cooke, 3, and his dad, Brian Cooke, examine a succulent plant at the SmartScape Expo in Laguna Beach. Brian Cooke said, “Jasper’s been watching ‘Curious George Goes Green.’ The show talks about composting so I thought it would be cool to bring Jasper here to check it out. We got some free compost and we painted a pot over there.” Credit: Kathy Ochiai

They do seem particularly impressed with the Echeveria subrigidas.

The City of Roses is being transformed into the City of Sedums as nearly 300 Portland rooftops are now blanketed in the drought-tolerant succulents.

And as rooftops in Oregon are going green, some of the businesses that design, build, and landscape ecoroofs are having an economic mini boom.

Don’t care for the economic benefits? Here’s another great benefit for your consideration. 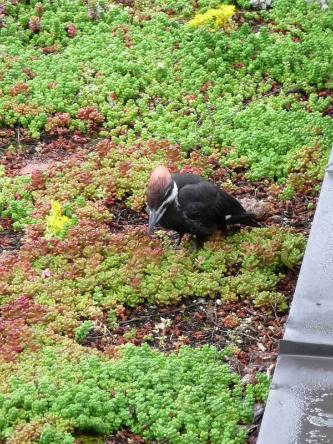 In addition to stormwater management, urban heat island reduction and good looks, ecoroofs can provide habitat for various urban wildlife, particularly birds and insects. Soil and vegetation attract pollinators and other insects, which in turn attract birds. Multiple species have been documented feeding, resting and even nesting on Portland ecoroofs.

Bowood Farms’ green roof didn’t do well in this summer’s tough weather (in Missouri) and so they will replant with tougher plants like sedums. They posted photos so everyone can see the process.

Accuweather says you should,

Forget the Whales! Save the Pollinators

We agree. To encourage you, here are photos of California native milkweeds and sunflowers. 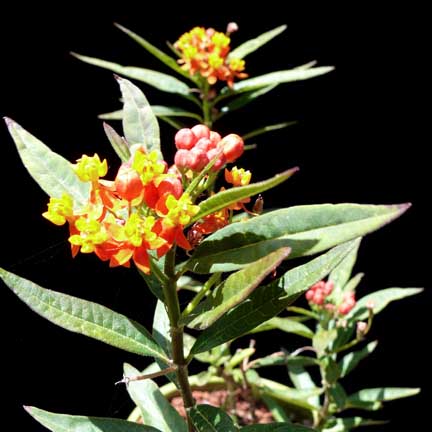 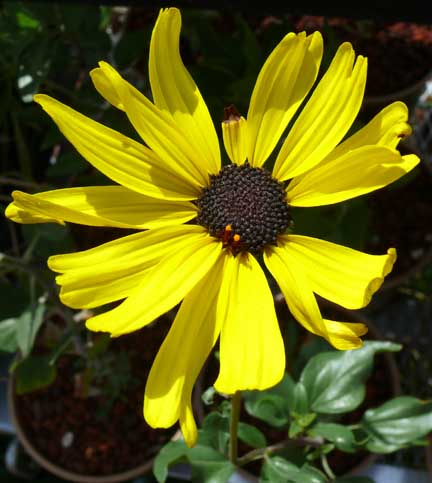 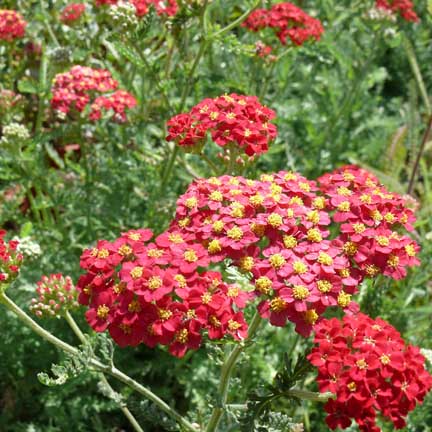 And a bonus Achillea “Paprika”

Now that’s how you attract native butterflies and bees.

(T)he roof of Port Coquitlam’s new Walmart Supercentre was quiet and serene. To the east the view of the coastal mountains was spectacular and the lush foliage on the banks of the Pitt River created a wall of green. But it was the 220,000 hand-planted sedums and succulents that were taking root on Walmart’s roof that drew one’s attention. 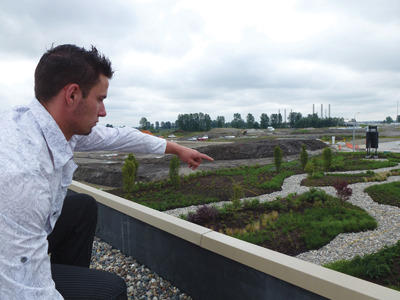 The tiny, colourful, drought-tolerant plants that more-rightly belonged in rock crevices or an alpine meadow stretched out as far as the eye could see.

Sounds like Canada. Let’s look up this Port Coquitlam. And… it’s in British Columbia, so you know it’s gonna be pretty.

And the trails are nice and neat and cleaned up too. 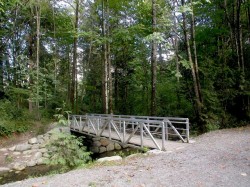 So if you visit Port Coquitlam in British Columbia, remember to visit the Park and the Trail and the Walmart roofscape.

Well it’s not a cactus, properly speaking. It’s a “Cactus Sponge”! and not just any cactus sponge, but the Cactus Sponge, Dendrilla antarctica, which I guess makes it more of an animal than a plant, too. 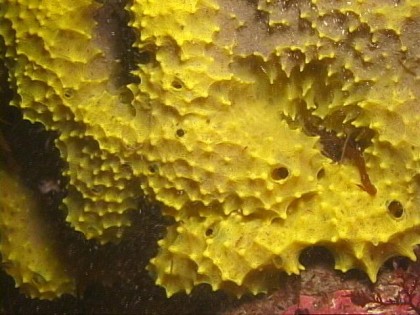 Pretty creature. It would probably be hard to keep it alive in a fish tank.

James Cornett of the Gannett Company was looking for cactus near Palm Springs.

I had heard the Mojave fishhook cactus was rare. I did not, however, expect that it would take me an entire day to find one in what was considered prime habitat or that it would take me another four years to finally discover one in bloom. In the end it was worth it. With the discovery of this species in bloom (known to botanists as Sclerocactus polyancistrus) my list was complete. I had found and photographed all 25 species of cactus known to exist in the deserts of California while they were in bloom…. 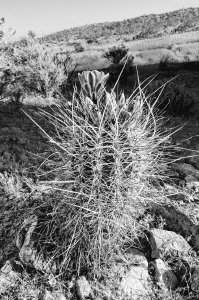 The other factor making it difficult find a Mojave fishhook is that each specimen looks very much like a browsed clump of bunch grass. The spines (some of which are hooked) are drab in color and appear as wispy as grass blades. Since bunch grass mounds are usually common in the Mojave Desert, distinguishing the grass clumps from the cactus is not easy even at short distances. I had to walk within a few feet of the two specimens I eventually located on my first full day of searching.

No closeup of the bloom? Maybe he’s saving them up for a book.

Protecting a poppy in the White Dome Nature Preserve is also going to help protect an endangered cactus. Yay!

The White Dome Nature Preserve, as it is now called, is home to the largest gypsum formation; it is located off River Road north of the Southern Parkway (Utah).  In addition to the Bear Claw Poppy, it is habitat for the Siler Pincushion Cactus, which is also threatened, says York, as well as providing protective habitat for several at-risk animal species, including the zebra-tailed lizard and the loggerhead shrike.

It’s a twofer. And if you add in the lizard and the shrike (a lizard-eating bird!), it’s a fourfer.

Green roofs – roofs that are covered with vegetation -are hot, and for good reason.

Berlin has between 5-30% of roof space greened in different parts of the city at the time of writing.

Germany adds about 11 million M2 of green roofs each year.

Here’s a picture of the Con Ed building roof. 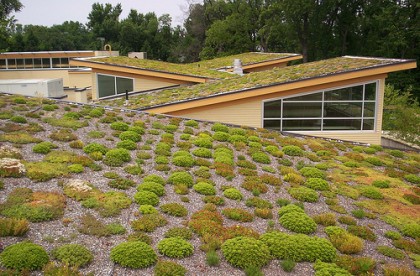 In the quiet seaside town of Tweed Heads,

The 1300 square metre garden will sit atop the Serene Living apartment complex for over 55s.

Do they not have a word for Seniors, like “Seniors”?

More than 2000 plants will be grown in the garden including… 10 types of exotic succulents and palms.

By exotic I assume they mean sedums and sempervivums. 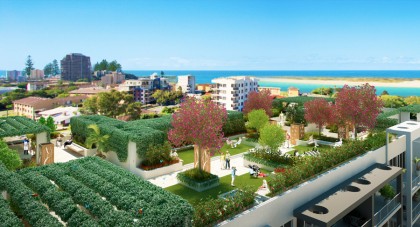 Artist’s impression of the overall view of rooftop garden oasis

I can see the beach from there! I can fly!

We had some big hail last night. Here, take a look are what we found this morning.

Hail! And damaged plants too. And yes the holes in the Aeonium are from the hail. 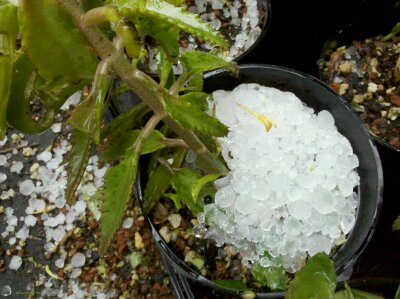 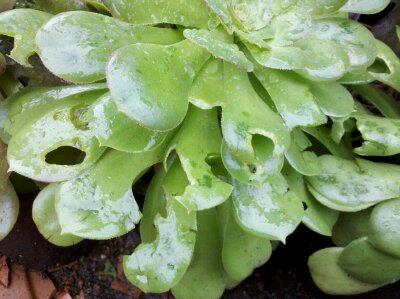 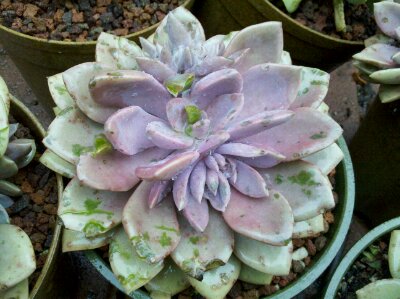 Every now and then a new article about protecting the Cactus Wren from destruction comes across my desktop, and I blog it. In fact, I’ve blogged about that little wren so many times that by now I just look for cute little pictures. I’m sure the article is just as entertaining as this photo, so click through, but really, I mean, awwww….  sooooo cute….. 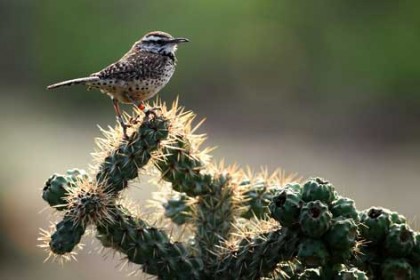 UCI biologists are creating a welcoming habitat near campus that they hope will help the cactus wren thrive. Credit: Steve Zylius / University Communications.

Maybe Agave? They only use the heart of the plant for tequila, leaving all those giant pointy leaves around to burn as waste.

So they seem to be researching Agave for a Biofuel. Seems like a good idea. Keep the corn for corn syrup soft drinks.

This seems to be the local African name for one of the tree aloes, possibly Aloe littoralis. From Botswana, we find that thieves have stolen the last trees from habitat.

As we approached Mmanoko from our assignment, we saw a Mazda van packed with cactus trees (mokgwapha), prompting us act. We followed the van for a while, taking pictures as we went, until we decided that BDF headquarters in Mogoditshane was safe enough to flag the van down. Mara and I asked the people in the van if they had a licence to commit such a rape of the environment and the destination of the cargo.

And lo and behold, the three men in the cactus van could not utter a word of Setswana. Not even “Dumela!” We proceeded to do our enquiry in English….

The point is that felling 100 trees of the species is no less harm than mowing down a pride of lions without permission. For the right eco-balance, species of both flora and fauna are crying out for conservation.

It’s a hospital, which seems to be a good location for green roofing, since the roofs are often overlooked by more patient rooms higher up. As usual, we have a sedum roof, a “Pre-Vegetated Sedum Mat” with some grasses and small trees too.

Not the prettiest of green roof projects. No doubt it will fill in and be a better attraction for the patients over time.

My brother is working on a hospital project in New York. I wonder if he’s got a green roof going?

From Nat-Geo’s photo of the day comes this really beautiful bee shot.

I don’t normally repost photos like this, although you can find links to them on my twitter feed, but this one seemed a bit more stunning than usual. 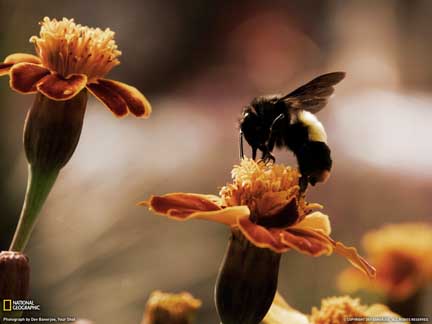 Photograph by Dev Banerjee, Your Shot 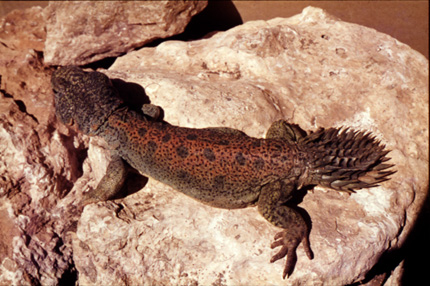 To follow up this morning’s trolling for Mono Lake Arsenic-eating Microbe search engine traffic, I have another picture I took this summer, of the Mono Lake Lupine. 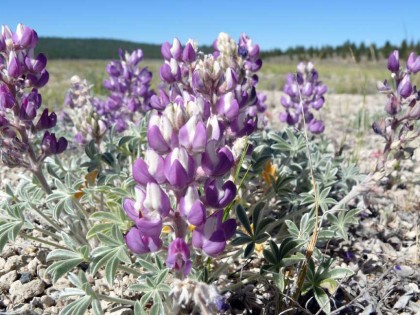 Clearly this is a classic lupine that grows in extremely harsh conditions, helping to reclaim lost land for the plant kingdom. Mono Lake does indeed have harsh conditions, harsh enough apparently that the microbes there are adapted to eating arsenic. I wonder if this Lupine eats arsenic too? Probably not. 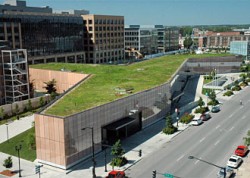 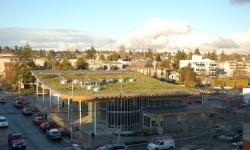 It’s the Milwaukee Public Library, and a bunch of progress photos for you to enjoy that come from these websites. 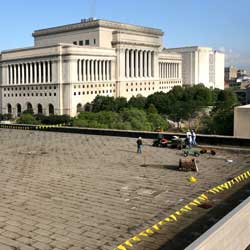 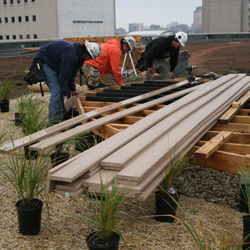 More photos after the break… END_OF_DOCUMENT_TOKEN_TO_BE_REPLACED

There aren’t any succulents in this green wall, but it’s EDIBLE! and that’s cool too.

The design is a fulfillment of the possibilities of CROP CIRCLES! and that’s cool too. There’s a crabapple orchard, a vegetable amphitheater, espaliered fruit trees, and more. Reach out and pick a piece.